Gauhar Jaan: A Rock Star Of The Gramophone Era 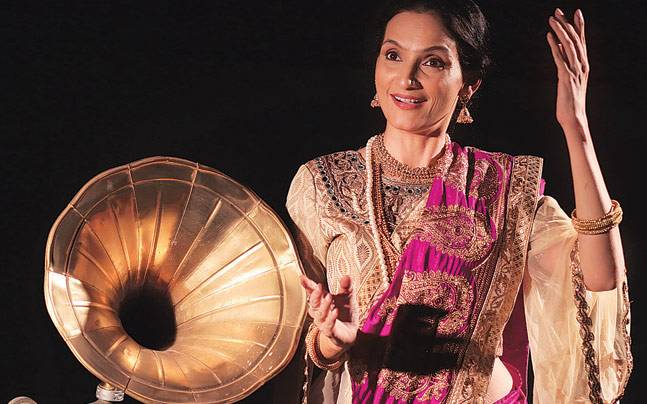 Now why was Gauhar chosen by the gramophone company? It was because it recognised a star in her and her ability to charm listeners. Gramophone was a new concept and the company knew that if listeners were not captivated, they would not be interested in buying the gadget.

Hindustani classical music was Gauhar’s forte and she excelled in thumri, dadra, kajri and tarana. Thumri , derived from Thumkana and meaning walking with dancing steps to make the ankle bells tinkle, was especially suited for her. This style originated from Uttar Pradesh and she had taken extensive training at Benares to become a maestro. Gauhar became a sensation nationwide, and the gramophone took her fame abroad. It inspired many future greats as well. For instance, Begum Akhtar was inspired by Gauhar’s singing to take up Hindustani classical music.

Gauhar’s grandfather was a Britisher and her grandmother was Hindu. Her mother, Victoria Hemmings, married William Yeoward, who was an Armenian Christian. Gauhar was born as Angeline Yeoward and her father left them to near poverty when she was just six. Victoria remarried a Muslim gentleman and converted to Islam. She went on to become the famous Kathak dancer and classical music maestro Malka Jaan in the court of Nawab Wajid Ali Shah. Malka renamed Angeline as Gauhar Jaan. While Gauhar was a devout Muslim, her singing was secular and she was an exponent of Rabindra Sangeet, kirtan, Bhakti geet and many other genres. She could sing in ten languages.

Gauhar was such a big star that her picture appeared on match boxes and postcards. She led a luxurious lifestyle and was known for her exquisite gowns and jewellery. Legend has it that she never wore the same jewellery twice for her stage shows. She used to love to roam around in a six-horse carriage, a privilege reserved only for the viceroy with a daily fine of Rs 1000 for others. She cheerfully used to pay the fine for the privilege.

Sadly, Gauhar was unlucky with men in her life. Her father left her, she had some failed love affairs and one of her lovers, a Gujurati-Parsi theatre artist named Keshav Naik passed away suddenly. She later married her secretary, but he swindled her of her wealth and property. The singer who used to demand Rs 3000 for one evening of performance during the first decade of the 20th century, agreed to be a palace musician in the court of the Mysore Raja for a monthly wage of Rs 500 during the last few months of her life. She died virtually penniless at 56.

The story of Gauhar has been beautifully portrayed in a two-hour play directed by Lilette Dubey, starring Rajeshwari Sachdev (who plays the young Gauhar) and Zila Khan (who portrays Gauhar in her later years). The unique feature of the play is live singing by both the actors. Lilette Dubey has based the play on the book on Gauhar by Vikram Sampath.

That then was Gauhar Jaan, a rock star of her generation, a singer who took on the challenge of recording when her contemporaries found it blasphemous and it is this reason for which Lilette Dubey says “she is on youtube while none of the others are”.

Hope you liked this rags-to-riches to rags story of Gauhar Jaan. If you want to know more about this versatile and talented singer, do watch Lilette Dubey’s highly successful play.

Thank you technology for keeping memories of singers like Gauhar Jaan alive.