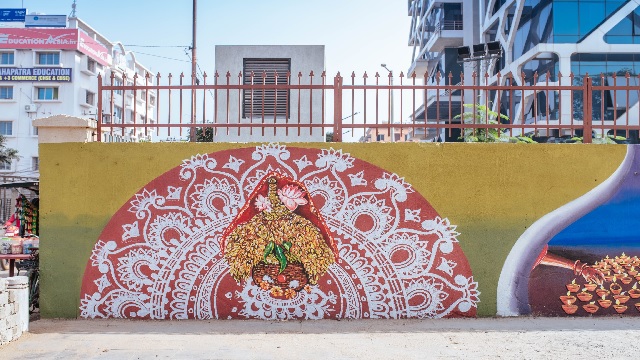 Bhubaneswar: The Rasulgarh Square in Odisha’s capital will greet visitors with myriad wall murals showcasing it as a union point of three cities – Bhubaneswar, Cuttack, and Puri ahead of Hockey World Cup 2023.

The parapet of the flyover is being painted with deep purple colour to indicate the gesture of royalty and ambition, and the pillars will have murals depicting tangible and intangible assets of the three places.

Notably, the painting work carried out under the Street Art and Murals Project (STAMP) will have themes including food, cuisines, culture, and important structures etc.

Besides, different sculptures will also be installed at the roundabout of Rasulgarh Square, which is a prominent entry point to the city, said an official from Bhubaneswar Urban Knowledge Centre in Bhubaneswar Development Authority (BDA).

It is pertinent to mention here that the Odisha Forest Development Corporation (OFDC) has also started planting different decorative plants at the roundabout and under the flyover spaces at the square that was once littered with trash.

The Street Art and Murals Project (STAMP) 3.0 was launched in Odisha’s capital by the Bhubaneswar Municipal Corporation (BMC) and BDA on December 1. The civic body will spend around Rs 3 crore on the beautification programme.