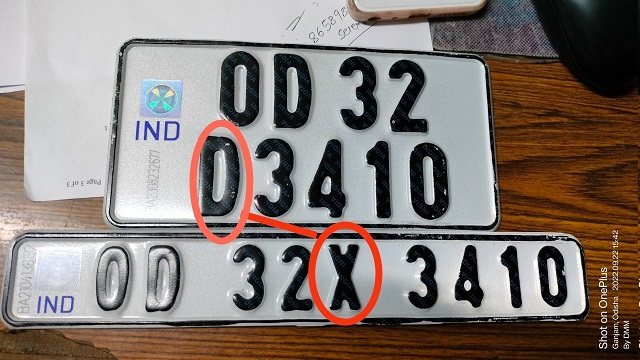 Berhampur: For owners of four-wheelers and two-wheelers, it has been a race against time to affix high-security registration plates (HSRPs). Providing some relief, the State Transport Authority (STA) of Odisha on Friday extended the deadline by a month.

What has, however, left vehicle owners miffed, upset and angry is the experience itself, which has been far from smooth: booking slots and then getting HSRPs affixed at the allotted place, day and time has been chaotic, vehicle owners are often returning disappointed and, moreover, the new plates often have errors in it.

Many are facing problems booking slots online and those who have booked slots are facing a long wait to affix HSRPs.

For vehicle owners, there is one more headache to contend with: Errors in the new plates.

As there was a big crowd, he could not affix the plate on the day allotted to him. Last Tuesday, he finally managed to affix it. But he soon realised that there was an error in the HSRP. While his vehicle registration number is OD-32 ‘D’…, it was printed as OD-32 ‘X’…

The agency in charge said it had been done as per his request and said they were helpless and refused to correct it. After he complained on Twitter, the agency assured to have it changed. The regional transport office in Ganjam has also directed the agency to fix the error.

This isn’t one such instance. There have been several instances like this. Besides, even if slots have been allotted, vehicles owners are returning disappointed after hours of wait due to overcrowding.