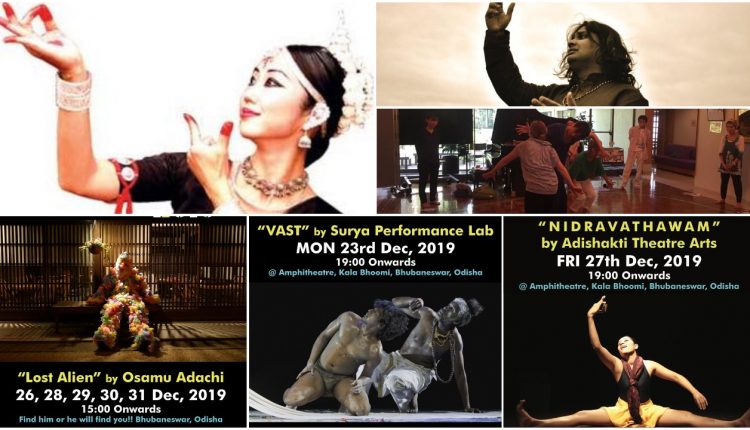 Bhubaneswar: She has been a true cultural ambassador of Odisha, a state to which she is connected through heart and not by birth.

“It has been very organic. It just grew on me and I love everything about this place. The air, the people, my students, it’s the place where I feel at peace, at home,” said Masako Ono, an Odissi dancer of Japanese origin based in Bhubaneswar.

Odisha Bytes caught up with her to know about her love for Odissi, Odisha and the idea behind Odisha Biennale 2019, starting December 23 at Kala Bhoomi here.

“In the last 10 years, I have travelled to 23 countries to perform Odissi and showcase Odisha, which I feel is indeed India’s best kept secret. It is under discovered. And Odisha Biennale 2019 allows artistes from across the globe to soak in its richness amid cross-cultural discourses,” she said.

And it all began with ‘Odisha Odissi – Dance and Living of East India’, an exhibition that she had organized in Tokyo. “During my performances, people would come up to me and ask me about my jewellery, the saree I wore. They were equally fascinated by them and wanted to know more about Odisha. Some people suggested that I hold an introductory exhibition on Odisha showcasing filigree works, Odisha handloom and the intricate temple carvings,” she said.

It whetted their appetite and they wanted to know more about the state. “The artistes in Japan don’t know much about India. Maybe they are aware of Kolkata, but nothing beyond it. They wanted to come to Odisha and explore the state but not as tourists but in a space that allows exchange of art and culture. They had suggested that I start an art festival in Odisha, creating space for artistic pursuits without boundaries,” she said.

Masako was initially reluctant, but soon support poured in. “People were ready to make posters for free. My students were all every enthusiastic and left me with no choice but take it up as a challenge,” she said. And as they say the rest is history.

This year, the festival will see over 70 artistes from India, Japan, UK, Mexico, France, Brazil and Sweden.

Masako will also be exploring her connect with Odisha and historical links between her country of birth and the state that rewrote her destiny in her performance at the art festival. “I am no scholar, I won’t delve deep into the pages of history. The dance will connect some of those dots juxtaposed with my own creative endeavour,” she said.

Themed ‘Illusion’, the bi-annual art carnival will have workshops and symposiums on theatre, contemporary dance, music,  bamboo quilling, calligraphy, design and editorial with evening performances at the amphitheatre till December 31.

“French artists will showcase an installation of interlocked cardboard modules. They want 25 volunteers for it. It will be quite interesting and involve all,” said Masako.

Odisha Biennale is among her many efforts to let people discover the hidden gem which she calls her home, Odisha.

To unify artists from various genres and segments and propagate art and culture, she along with her husband started Mudra Foundation in 2009 and through it she took Odisha’s Dhokra (brass craft) to Shinjuku Store Main Building, again in Tokyo in 2014.

“We have been working with Ikat and had provided 20 Ikat sarees to the students of Bunka Fashion College for creating costume for a fashion show in 2018. We will be getting those colourful costumes to Odisha and my students will wear them during my performance on December 30,” said this native of Tokyo.

The connect which Masako shares with the place and the dance form is reflected in her approach as she reaches out to people making it relatable. “I don’t want people to look at it as a foreign thing, but relate to it at their level,” she said.

She does it by weaving a tapestry drenched in myriad colours that represent Odisha and its richness through such carnivals and exhibitions and one-on-one interactions with people.