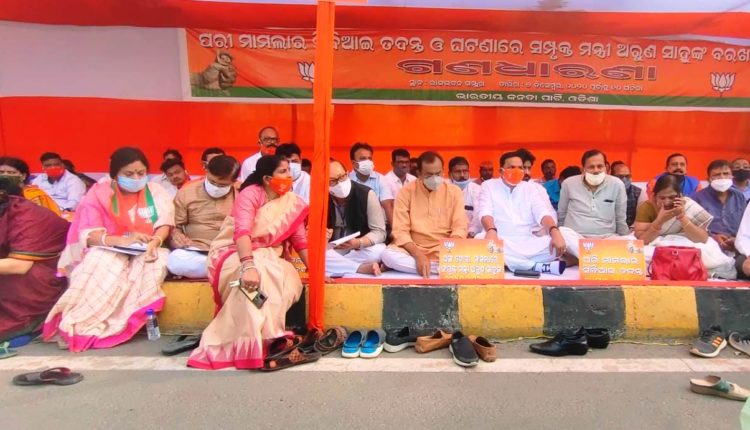 Bhubaneswar: Stepping up the heat on the ruling BJD, Odisha unit of BJP on Monday sought Governor Ganeshi Lal’s personal intervention while reiterating its demand for handing over of the Pari murder case to the Central Bureau of Investigation (CBI).

The women’s wing of BJP staged a protest in front of Raj Bhavan here and handed over a memorandum addressed to the Governor.

BJP Mahila Morcha leader Smrutirekha Patnaik demanded immediate ouster of Minister Arun Sahoo for his alleged involvement in shielding the perpetrators of the crime. The party will launch protests across the state anytime in the next 48 hours if the demands are not met, she warned.

“If the state government wants a free and fair investigation, it should hand over the case probe to CBI. Our second demand is CM Naveen should expel minister Arun Sahoo from his post. Prime accused Babuli Nayak and his accomplices should be arrested. Action should also be taken against erring police officials,” said the Mahila Morcha leader.

State BJP President Sameer Mohanty slammed the ruling party for not sacking Sahoo, the Nayagarh MLA, and said, “The Minister is yet to be questioned in connection with the case even though Pari’s parents have named him in their allegation and an audio tape purportedly containing his interaction with the local sarpanch is in public domain,” he said and asked, “By continuing as minister, is Sahoo not in a position to influence the probe?”

In July, Pari (5), daughter of an auto-rickshaw driver, was reportedly abducted when she was playing outside her house at Jadupur village in Nayagarh district. Subsequently, the minor girl’s skeletal remains and chopped body parts were found dumped in the backyard of the house.

The BJP has been pressing for its demands even as the state government has ordered a High Court-monitored Special Investigation Team (SIT) probe into the case following a demand from the Congress.

Addressing the gathering, Leader of Opposition Pradipta Naik questioned as to which HC judge was monitoring the case. “The people of the state are still in the dark as the name of judge monitoring the case as announced by the government is yet to be disclosed,” he said.