Kidney Cancer Awareness Month: Know All About The Disease 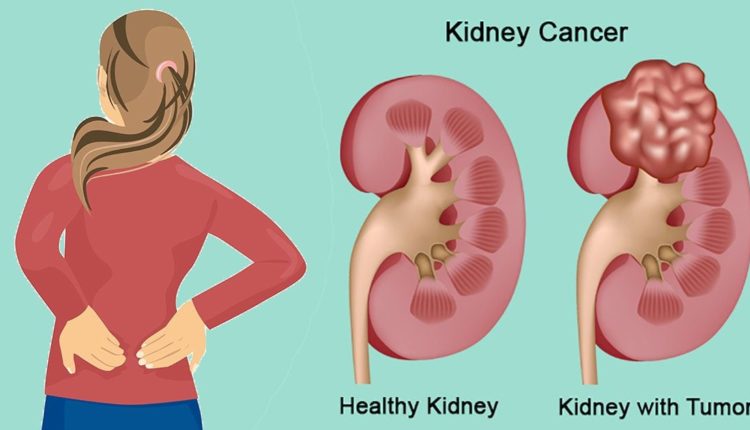 RCC is the most common cancer affecting the kidneys. The main predisposing factors are older age ( > 60 years ), smoking, hypertension, obesity, polycystic kidney disease, acquired renal cysts because of chronic dialysis, excessive use of painkillers, kidney stones, exposure to toxic chemicals like asbestos, and certain familial or genetic syndromes. One in 20 cases of RCC arises from deleterious mutations inherited from either parent. Such patients are more likely to develop cancer at an earlier age and in both the kidneys.

Most of the patients present themselves with haematuria (blood in the urine). It is painless ‘haematuria’. Occasionally, patients complain of pain in the flank (loin). Patients with advanced disease present with symptoms related to the involved organ (bone pain, breathlessness).

RCC is diagnosed when routine imaging is done for ‘haematuria’ or flank pain. On ultrasonography of the abdomen, radiologists can find out whether a tumor in the kidney resembles RCC. Further investigations include routine blood tests, Computed Tomography (CT) scan, or PET CT scan. A biopsy is needed to confirm the diagnosis.

Patients who have a disease localised to the kidney have a fair chance of cure with surgery. Mostly, a kidney sparing approach is adopted wherein a part of the normal kidney is left behind after removing the affected part. This allows the patient to have normal renal function. Nephrectomy (removal of a part or the whole kidney) is usually carried out by urologists or surgical oncologists.

For most of the metastatic (stage IV/advanced) RCC, the intent is palliative (prolonged survival). Even in advanced RCC, there are a handful of patients who get cured without treatment, suggesting the role of immunity in fighting cancer. Hence it is essential that prior to embarking on the treatment of metastatic RCC risk stratification (favourable risk/ intermediate-risk /poor risk) is carried out.

The mainstay of treatment in metastatic RCC is targeted therapy (cancer-specific targets or mutations are targeted), immunotherapy (medicines that boost the immunity to fight cancer ), or a combination of both approaches. Usually targeted therapy is used for favourable risk patients and the immunotherapy/ combination approach is used for intermediate/poor-risk patients. These treatment modalities have revolutionised the outcome of advanced RCC and many patients now survive beyond five years in this setting with some patients having prolonged remission (No evidence of cancer). Targeted therapy and immunotherapy should be planned under the supervision of medical oncologists.

Survivors of RCC should undergo periodic follow up with their oncologists to detect recurrences.

Types of surgery used for kidney cancer include the following procedures:

A ‘radical nephrectomy’ is usually recommended to treat a large tumour when there is not much healthy tissue remaining. Sometimes, the renal tumor grows directly inside the renal vein and enters the ‘vena cava’ on its way to the heart. If this happens, complex cardiovascular surgical techniques are needed.

Laparoscopic and robotic surgery (minimally invasive surgery). During laparoscopic surgery, the surgeon makes several small cuts in the abdomen, rather than the one larger cut used during a traditional surgical procedure. The surgeon then inserts telescoping equipment into these small keyhole incisions to completely remove the kidney or perform a partial nephrectomy. Sometimes, the surgeon may use robotic instruments to perform the operation. This surgery may take longer but may be less painful. Laparoscopic and robotic approaches require specialised training. It is important to discuss the potential benefits and risks of these types of surgery with your surgical team and to be certain that the team has experience with the procedure.

Role of radiotherapy in kidney cancer

There has been a paradigm shift in the treatment of RCC. From advanced surgical approaches including robotics to systemic targeted approaches, it has helped prolong survival in these patients.

The spectrum of radiosensitivity in RCC is wide, but it is not a radio-resistant disease. There is a developing rationale with emerging data suggesting that the use of high precision technologies including image guidance and motion management, allowing the use of higher doses per fraction, eg  VMAT, Stereotactic Body Radiotherapy (SBRT), Stereotactic Radiosurgery (SRS),  provides better local control rates compared with conventional RT.

Intracranial SRS for Brain metastases has reported local control rates averaging 85%, without the decline of cognitive function observed with WBRT.

Emerging data reveals with the use of SBRT,  unresectable local recurrences or oligometastatic disease can successfully be treated with durable local control and minimal toxicity.

Additionally, an emerging awareness of the capacity of high dose irradiation to stimulate an immune response has resulted in combinations of Stereotactic RT with immunotherapy bases approaches with future advances in these areas likely to benefit patients both in adjuvant and metastatic settings.

At present, both primary and metastatic RCC tumours may be successfully treated using Stereotactic approaches, using steep dose gradients to maximally preserve function and avoid the toxicity of adjacent organs including the liver, uninvolved kidney, bowel, and spinal cord regions.

No Need For COVID Test After Home Isolation: AIIMS Chief