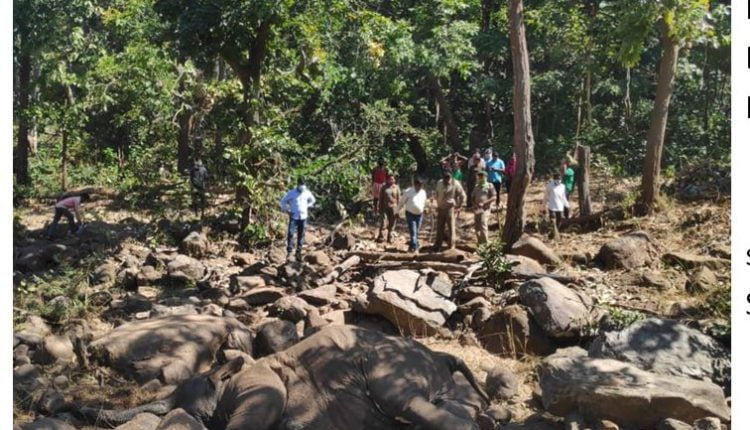 A couple of days after a female elephant was found dead by the side of Ghusurigudi Nullha, another carcass was recovered from the same spot on Saturday. Veterinary experts have attributed the deaths to haemorrhagic septicaemia.

Three female elephants were found dead in the same Ghusurigudi area on February 10, 9 and 1.

Meanwhile, a team from the Centre for Wildlife Health of Odisha University of Agriculture and Technology, OUAT, led by Prof Niranjan Sahu, has arrived in the sanctuary to ascertain the cause.

Principal Chief Conservator of Forest Sashi Paul had earlier told the media that the jumbo could have died due to some bacterial infection. The water bodies in the sanctuary could have been infected, he added.

Divisional Forest Officer, Kalahandi (South Division), Ashok Kumar, said that the lab test of the first elephant conducted at Centre for Wildlife Health, OUAT, in Bhubaneswar revealed Haemorrhage Septicemia as the cause of the death. The dead pachyderm, found near Tentulipadar village inside the sanctuary, was pregnant.

The five elephant deaths in such a short span of time have raised concerns among the villagers.

They have been advised not to allow their cattle inside the forest as it is suspected that the water bodies could be contaminated for some reason or the other, the DFO said.

Stagnant water is being treated with bleaching powder to avoid further spread of infection and water samples have been collected from different spots for testing, he added.