Lessons For The Congress In The Death Of The Left 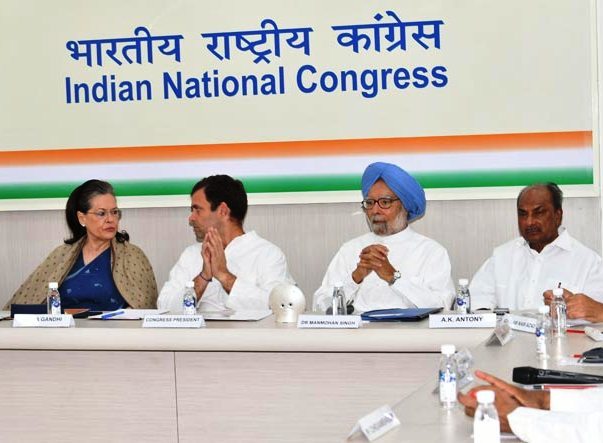 How do political parties die? If the Congress is serious about reviving itself, it must study the fall of Left parties in India and protect itself from dying first.

The Left, for the uninitiated, was the biggest challenger to the Congress in the first few decades after Independence. The BJP was nowhere in picture then and the Congress had to be on its toes with strategies to stop them from gaining an upper hand in Indian politics. The party gradually appropriated the Left’s core principles and made it progressively irrelevant. With nothing new to offer to the masses in terms of messaging, obstinate refusal to make pragmatic shifts in its ideological response to people’s issues and denial of space to new leaders, the Left parties made themselves redundant. Now, they are all but dead, breathing only in a few universities and in the seminar circuit.  The Congress – it may refuse to acknowledge it – is headed in the same direction.

It is easy to notice the ‘Hand’ party’s areas of weakness, which stand out in stark contrast to the BJP’s robustness. The problem is the Congress chooses to be blind to these. Here are three major ones:

Messaging: This translates into what the party stands for. The BJP is absolutely clear about the core of its ideology: Hindutva and nationalism. In the Congress even the top leaders would find it difficult to explain what the party exists for. Now, how does a party find new followers and sympathisers when it has nothing specific to convey to them? As the post-election data suggests, among young voters, particularly first-timers, Prime Minister Narendra Modi was the overwhelming favourite. This was the case in 2014 too. Despite being aware of it, did the Congress have anything interesting to convey to them? No. It was peddling the same old one-size-fits-all narrative to all. This exactly was the case with the Left parties. Rahul Gandhi must make clear what the Congress stands for and take it across the country with conviction.

Leadership: The expression ‘democratic leadership’ is oxymoronic. It in some ways assumes the leader as first among equals, a firm believer in consensus. The reality is the leader must be in command and full of authority. As examples of big leaders suggest, he must possess a ruthless streak, both while pursuing an agenda and curtailing dissent within. Modi is a great example of a leader with an uncluttered mind. Rahul, however, is a confused leader, unable to assert himself even within the party.

It is clear now that while Rahul was busy running a hectic campaign for the party, the chief ministers of Madhya Pradesh and Rajasthan were busy furthering the political future of their children. In Karnataka, Siddaramaiah was busy undercutting alliance partner JD(S) rather than fight the BJP.  This has happened earlier too. Any strong leader would show such leaders the door. In Congress they manage to survive and thrive. No wonder the party is the worst enemy of its own. Think of the Left where same leaders have been occupying plum party positions for years, virtually stopping the emergence of new leaders with fresh ideas. They do not have a dynastic trait as other parties but that hardly means much. Can Rahul, a dynast himself, be merciless on others promoting offsprings at the cost of the party? It appears difficult.

Organisation: The need for the presence of the party’s organisation at all levels is so basic that it needs no overstating. Can the Congress revive its Seva Dal, the grassroots organisation which acted as the strongest link between the party and the masses? And can it reinvigorate its other frontal organisations like the NSUI? There was a time when members of the Seva Dal served as the eyes and ears of the party and had a big say in the selection of candidates. With the old generation of original Congress workers gradually leaving the scene, the party needed measures to find new ones. It is perhaps too late for that now.

Has anyone noticed how the Left parties displayed little enthusiasm for connecting to the cadre on the ground and masses in general in West Bengal and Tripura after losing elections? Any effort to revive at grassroots would take years of sustained effort. Does the Congress have the stomach for such an effort? For that to happen, it has to forget power for a long time.

The signs of death are written all over the party. It remains to be seen how it moves from now onwards. It has to resort to creative destruction to be relevant again.