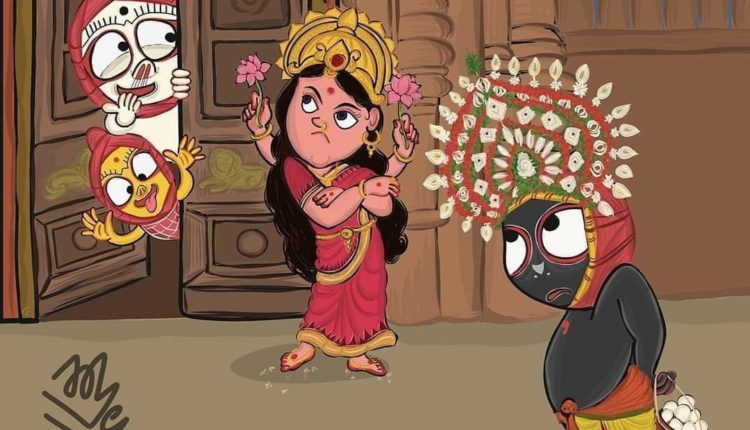 Bhubaneswar: Today is Niladri Bije, the concluding day of Rath Yatra when the sibling deities return to their thrones after their annual sojourn. However, they are restricted by Goddess Lakshmi from entering the temple. That is when Lord Jagannath offers Rasagola to please the angry Goddess and enters the temple.

This is how a writer describes the whole episode as depicted in a meme:-

A miffed Lakshmi, sheepish Jagannath, impish Balabhadra and Subhadra… it also reveals a very profound and uncomfortable reality of human society – when a couple quarrels, the rest of the world tends to have fun at their expense.

Social media was full of heart-warming memes by different artists who captured this year’s Rath Yatra right from the time the Supreme Court gave its verdict on holding it with conditions amid the COVID-19 pandemic. 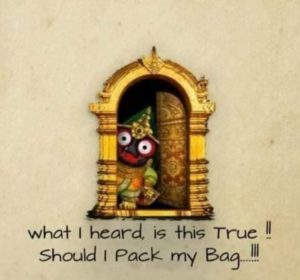 This one by an unknown artist really endeared itself to people after the Supreme Court verdict.

Then, Satya Swagat Mohanty depicted the series of events related to Rath Yatra through his Instagram post @logokuhe. Satya narrated the story behind the rituals observed during Rath Yatra through cute and colourful memes of Lord Balabhadra, Goddess Subhadra, Lord Jagannath and Goddess Lakshmi. 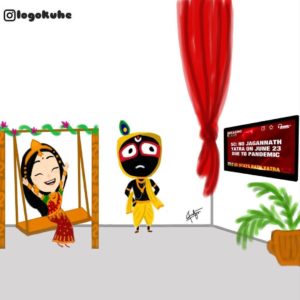 Goddess Lakshmi is happy over the SC’s order while watching TV while the Lord stands next to her, visibly disappointed. 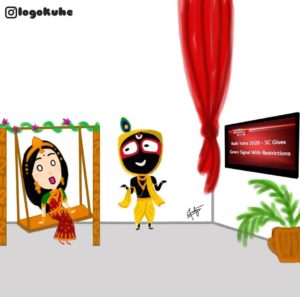 “Looks like the tables have turned now” implies the SC’s consent for the festival to commence. 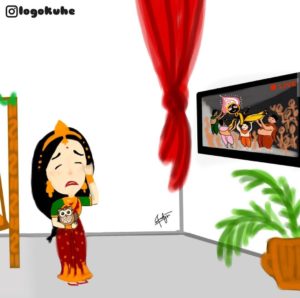 Goddess Lakshmi can be seen watching ‘Pahandibije’ on a screen and crying because she is left alone. 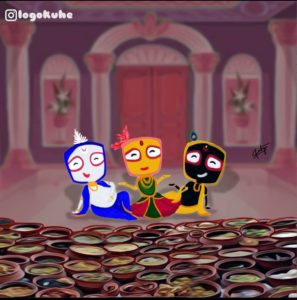 “Enough food and a good company are all you need after such a tiring journey.” The three siblings enjoy a feast. 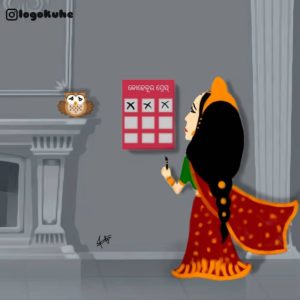 “6 more days” Goddess Lakshmi can be seen counting days and striking out dates across the calendar waiting for the Trinity to return. 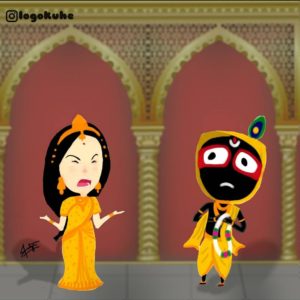 Next about the ritual “Angyamala” where Goddess Lakshmi out of anger and impatience, after waiting for five days proceeds in the form of Subarna Mahalaxmi to the Gundicha Temple to threaten Lord Jagannath to return back at the earliest. To please her Lord, she offers an “Angyamala” (garland of consent). 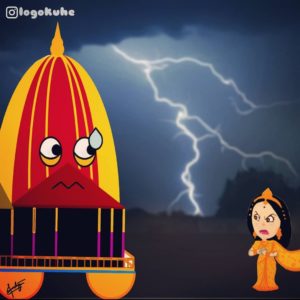 While returning from Gundicha Temple, Goddess Subarnalakshmi breaks a portion of the Nandighosha to teach the Lord a lesson. She secretly returns through Hera Gohiri Sahi of Puri. This unique ritual, called “Herapanchami” is enjoyed by many devotees. 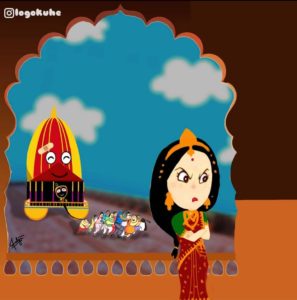 Mahalakshmi can be seen stealing a glimpse of the returning Nandighosha through Chahani Mandap. 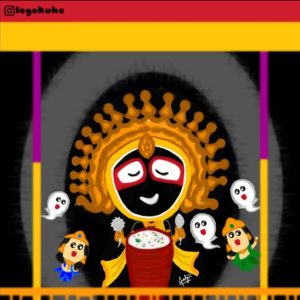 “Sunabesha” and “Adharpana” ritual is neither for the devotees nor the servitors. It is for the evil spirits (parsava devatas) who have been guarding the chariots during the festival. 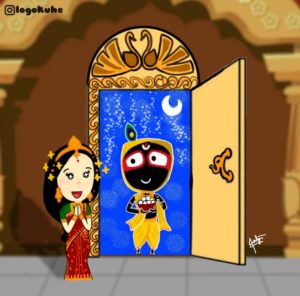 The Lord returns home at last!

One moe to go:

The three siblings as depicted after the Snana Purnima ritual when they supposedly fall ill after the royal bath with 108 pitchers of sacred water.

Rituals Of Jagannath Temple In Puri Finalised For Kartik…