Low-Pressure Area Forms Over Bay Of Bengal, Another Likely On Nov 14; Rain In Odisha From Tomorrow 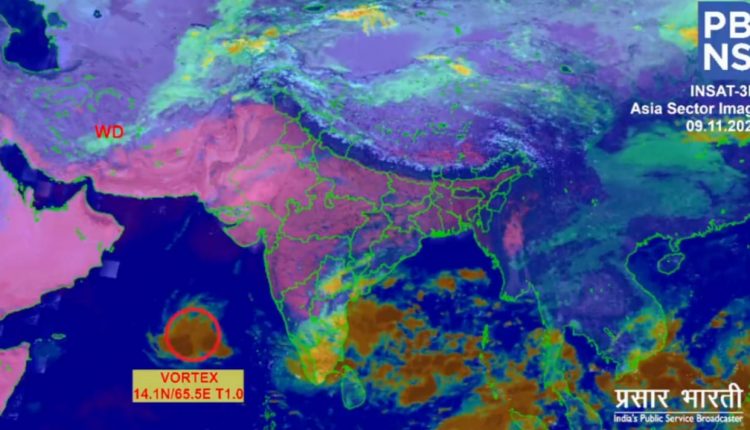 Bhubaneswar: A low-pressure area formed over the southeast Bay of Bengal and the neighbourhood around 8.30 am on Tuesday under the influence of cyclonic circulation in the same region, the Bhubaneswar Meteorological Centre here tweeted.

It is very likely to concentrate into a depression over southwest and adjoining southeast Bay of Bengal in the next 36 hours and move west-northwestward and reach north Tamil Nadu coast by November 11 morning, it added.

Under its influence, light to moderate rain or thundershower is very likely to occur at one or two places in Ganjam, Gajapati, Rayagada, and Koraput on Wednesday.

The rainfall activity is likely to intensify the following day with light to moderate rain or thundershower at a few places in Gajapati, Rayagada, Koraput, Ganjam, Malkangiri, and at one or two places in Puri, Khurda, Nayagarh, Kandhamal, Nabarangpur, and Kalahandi.

Several places in Gajapati, Ganjam, Kandhamal, Rayagada, Koraput, Malkangiri, and a few places in Khurda, Puri, Nayagarh, Nawarangpur, Kalahandi, and one or two places in Cuttack, Jagatsinghpur, Nuapada, and Balangir will experience light to moderate rain on Friday.

Light to moderate rain or thundershower is also likely to occur at a few places in Kandhamal, Kalahandi, Nabarangpur, Nuapada, Balangir, and one or two places in Ganjam, Gajapati, Rayagada, Malkangiri, and Koraput on Saturday.

The Centre for Environment and Climate (CEC), SOA Deemed to be University, had said that Odisha may experience cloudy sky from Tuesday afternoon while light to moderate rain accompanied by thunderstorm and lightning is likely to occur in coastal and south Odisha districts between November 11 and 13.

The CEC had further said that this system is likely to be followed by the formation of another low-pressure area over the central Bay of Bengal on November 14 which may get very close to central Andhra Pradesh coast on November 16. This could result in moderate rainfall at many places over Odisha with heavy rainfall at one or two locations in south Odisha districts.