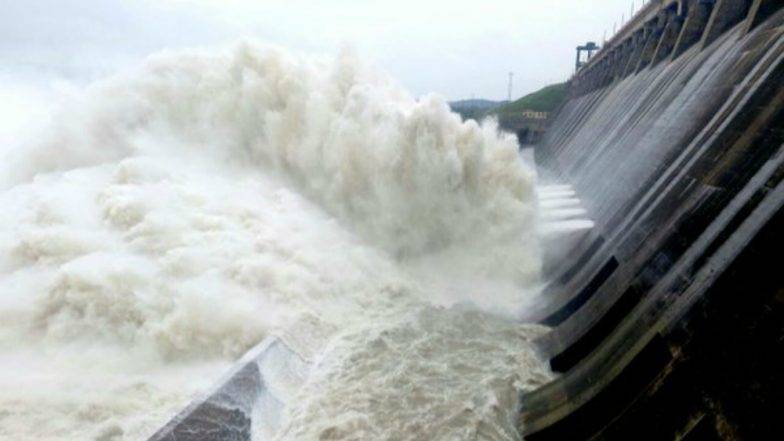 Bhubaneswar: A fresh political war has erupted between Odisha and Chhattisgarh with a swollen Mahanadi river threatening to flood large areas of both states following days of heavy rainfall triggered by two back-to-back low-pressure systems in the Bay of Bengal.

Although the intensity of rainfall subsided in Odisha on Monday, heavy rainfall is continuing in Chhattisgarh, feeding more water into an already swollen Mahanadi, whose water level continues to rise.

A day after Chhattisgarh accused Odisha of not opening enough sluice gates of the Hirakud Dam that it said has led to flooding in Chhattisgarh by a Mahanadi in spate, BJD MLA Debi Mishra hit back on Monday. Mishra said that when the Mahanadi dries up in Odisha during summer months, Chhattisgarh refuses to release the river’s waters to its neighbour, derailing farming activities and causing hardship to Odisha’s farmers year after year.

“It has also built barrages across the Mahanadi to prevent its waters from flowing into Odisha during the summer months. Now, Chhattisgarh, faced with floods, wants to release the Mahanadi’s excess waters to Odisha,” he said.

As heavy rains continue to pound the upper catchment areas of the Mahanadi, Chhattisgarh has opened all 14 sluice gates of the Gangrel Dam in Dhamtari district, according to media reports.

But with the Mahanadi threatening to flood large parts of Odisha, the Hirakud Dam authorities closed eight sluice gates on Monday out of 34, which had been opened in a phased manner to release excess floodwaters.

At present, the excess water from the dam reservoir is being released through 26 gates — eight on right side and 18 on left side. While the dam’s storage capacity is 630 cubic feet, the water level stood at 620.73 cubic feet at 12 noon on Monday.

Special Relief Commissioner (SRC) Pradeep Jena, in a tweet, said, “Hirakud Dam’s 8 gates will be closed to regulate and control the flood situation in low-lying areas till 9 am on Tuesday.”

Heavy rain in upper catchment areas of the Mahanadi has led to a rise in the water level of the reservoir. The inflow of water to the reservoir was 9.7 lakh cusec while the outflow was recorded at 5.71 lakh cusec.

Blaming Odisha for not opening enough sluice gates of the Hirakud Dam, Rakesh Kumar Nagaria, Chief Engineer in the Chhattisgarh government, told a private news channel on Sunday, “In the past also, such mismanagement has been done by Odisha. Please open the sluice gates… there is a lot of flooding and damage in Chhattisgarh.”

Asked about the situation in Mahanadi, data on the river’s water and rainfall report, Nagaria asked the reporter to approach “Odisha’s engineer-in-chief for an answer”.

“Odisha’s engineer-in-chief will reply,” he shot back.

Asked how many cusec of water was flowing into the Hirakud Dam and how many gates should be opened, Nagaria said that Odisha has all the data.

When reminded that Odisha has often complained about lack of data-sharing on Mahanadi’s waters by Chhattisgarh, Nagaria seem to lose his cool and said, “Does Odisha say anything other than complaining. You please speak to officials in Odisha.”

Speaking to media persons on Saturday, Sahoo alleged that Chhattisgarh authorities were not informing their Odisha counterparts before opening the sluice gates of the dams over Mahanadi in their state.

As a result, Hirakud Dam was receiving heavy inflow without notice forcing the authorities to open the gates.

The Odisha government, in an affidavit submitted to the Mahanadi Water Disputes Tribunal, has claimed that the Chhattisgarh government has blocked excess river water in the upper catchments of Mahanadi.