Mahisasuramardini Idol Found During Excavation Behind Sari Deula In Bhubaneswar 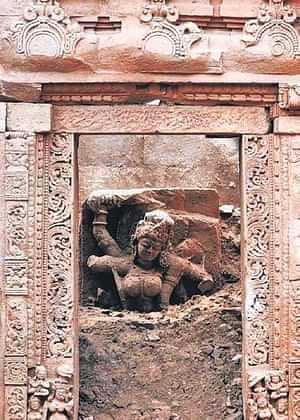 Bhubaneswar: The excavation on the Sari Deula complex in Old town continues to spring surprises. An idol of Mahisasuramardini, believed to be about 1400 years old, was found by the Archaeological Survey of India (ASI) while clearing the garbhagriha (sanctum sanctorum) of a partially-buried temple behind the Bhabani Shankar temple on the premises, on Wednesday.

She is considered to be the presiding deity of the temple believed to be belonging to 6-7th century AD.

A few days back, excavators had found an Ardhanarishvara sculpture there.

An ancient sculpture of Lord Vishnu, an inscription, fragments of a metal container and a decorative panel were discovered by the ASI while excavating the buried temple in February.

“We cannot exactly say right now how and why the temple was damaged but it seems debris of Shikhara of a temple were used to deliberately pack it. We are saying this because a wall was constructed abutting the main wall of the temple besides, its entrance was blocked. Further excavation can reveal more details about the temple,” he added.

Why Women At Work Need Flexibility