Why Women At Work Need Flexibility 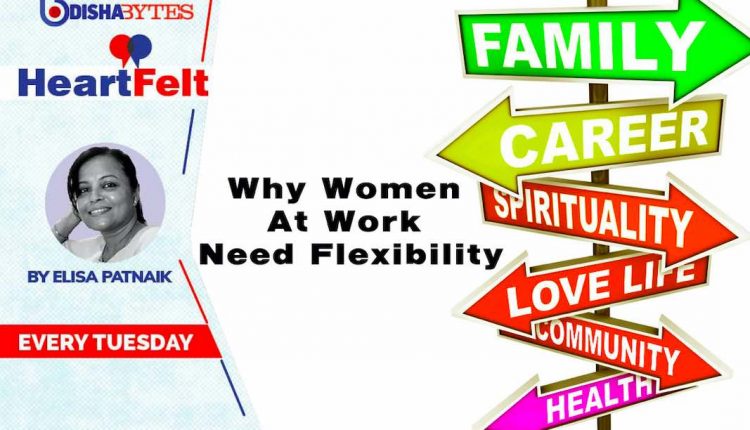 Thirty-four-year-old Shraddha Pattnayak, a Project Manager with a leading consulting firm has been working from home since the COVID pandemic with periodic visits to her project locations and office as and when required. The last two years of working remotely revealed that she could very well work from home without compromising on her deliverables and deadlines. As a mother of two young children, who also happened to stay at home during the last two years, the arrangement suited Shraddha well.

Though she had to work for longer hours, she had an improved work-life balance with better flexibility and time management working from home and she was able to upgrade her skills too. However, she was in a for a rude shock when she was overlooked for a promotion for Senior Manager which went to her male colleague instead who had better visibility among her bosses since he was present in the office most of the time.

Sradhha had a similar experience a few years back when she was not considered for a promotion when she went on a 4-months maternity leave despite her notable performance earlier. Disappointed and frustrated, she is now considering resigning from her present job, not willing to continue in an organisation that is not just biased but also insensitive to the needs of its women employees.

Working women have never had it easy. Especially those working in the competitive, ambitious and aggressive world of corporate organisations where the parameters for assessment are grossly inequitable. They are frowned upon not only for demanding flexible working conditions and timings but also looked down on for taking maternity leave, leaving the office early, not attending after office parties and turning down travel, when their children fall sick.

Flexible working is among the biggest priorities today for all professionals, especially for working women. Women are often pitched against their male counterparts and are judged on the same parameters in the so-called level playing field. Quite often, they work tirelessly to break the glass ceilings to prove themselves. Unfortunately, however, this trend not only makes it harder for women to match up to these standards but also doesn’t bring back the focus on the need for inclusive and gender-friendly working policies and environment for women employees.

It’s no secret why women need a flexible work environment to thrive, contribute and succeed. As women enter the workforce, they usually have to prove themselves in an ecosystem that has been conventionally built for men to perform and succeed due to the existing patriarchal structures and norms. Marriage and motherhood bring in additional challenges with women struggling to balance their personal and professional lives without adequate support, both at home and in the office. This often leads many women to drop out of the workforce. Another survey by TimesJobs found that 90% of working women and only 10% of men thought of quitting their jobs because of childcare issues.

As per the Timesjobs survey, most women professionals said that work-life imbalance was their biggest challenge (48% respondents), followed by the gender pay gap. Most respondents also said that while hiring most firms held a bias against mothers, preventing women from resuming work post-maternity, reinforcing the age-old practice of conscious and unconscious bias about women at work. About 66% of respondents said that they faced absurd questions about marriage or plans on having children as compared to their male counterparts.

Moreover, it’s also been seen that working women are more likely to be worried about the availability of jobs and less confident, compared to working men. They are increasingly vulnerable to the uncertainty in today’s job market which is a matter of concern. The option of remote jobs provides the much-needed flexibility and growth in opportunities to help women bounce back into the workforce.

Women either prefer working in sectors like education, health and medicine or start their own ventures considering the fixed working hours and the flexibility to choose their work hours. A flexible work environment improves women’s work-life balance and helps them progress in their careers as shared by 43% of women in the LinkedIn survey. Nearly 34% respondents said it improves their mental health, and 33% said it increases their likelihood of staying in their current jobs.

As working women continue to juggle between personal commitments and career progression within rigid schedules they also take career breaks for personal reasons and to upskill and boost their employability. However, despite the obvious advantages of breaks and sabbaticals, 77% working women in India who took a break said it had actually set them back in their careers. This is largely due to the prevalent stigma associated with career breaks amongst recruiters and employers, which has made it difficult for every second (50%) working woman in India to explain their career break to recruiters. Consequently, many choose to exclude career breaks from their CVs (42%) or lie about their breaks to potential recruiters when being interviewed (35%).

Due to strong workplace bias, women are reluctant to openly ask for more flexibility because they are afraid of being ostracized and are judged harshly by their superiors and colleagues. As per the LinkedIn survey, while 88% working women had to take a pay cut to work flexibly, 37% had their flexible working request denied, and 27% struggled to convince their bosses to accept their request.

The stigma surrounding the need for flexibility and career breaks often compels women to take up lesser positions, salary cuts, or leave work. Women opting for flexibility are also excluded by their colleagues, held back from promotions, considered unambitious, inefficient and treated unfavourably by their superiors. Unfortunately, 9 out of 10 working women in India are departing or considering quitting due to a lack of flexibility.

While educated and qualified women in the organised sector face challenges with regard to flexible and conducive working conditions, the working life of their disadvantaged counterparts in other sectors is worse. It is evident from the overall labour force participation of women in India which has been falling, from 36.7% in 2005 to 26% in 2018 and currently at 22.8% as per the Periodic Labour Force Survey (PLFS), Ministry of Statistics and Programme Implementation.

Working women in India have been impacted more by the COVID-19 pandemic than their global counterparts. There is a constant struggle against a deeply entrenched gender bias and fighting for both equal pay and opportunity, according to the LinkedIn Opportunity Index 2021. In India, 85% of working women claim to have missed out on a raise, promotion, or work offer because of their gender, compared to the regional average of 60%.

Unfortunately, there hasn’t been any deliberate and conscious effort to bring in gender balance as part of business and human resource strategy to enhance female participation in organisations. Both inclusive policy measures and infrastructure support are a must to retain, support and appreciate women employees.

Organisations and recruiters need to reimagine their diversity practices and need to remove invisible barriers and the stigma associated with flexible working conditions for women employees besides introducing stronger flexibility policies to retain female talent. Normalising and de-stigmatising career pauses and resume gaps and helping women re-enter the workforce is another progressive step. Exposure and experience to help women at the mid-career level, as well as strengthening maternity programmes and fostering a strong voice of leaders for championing the cause of women with potential are crucial to retaining the female workforce.

Importantly, extending flexi working policy for males and making men equal care-work partners will also go a long way in helping women focus on their careers. An inclusive and gender-friendly organisation will not just understand the challenges and the bias that women face but also make positive policies for ensuring work-life balance, that make it easier for women to join and continue being a part of the workforce.

Mahisasuramardini Idol Found During Excavation Behind Sari Deula In Bhubaneswar

Cuttack Mayor Subhash Singh Resigns As Rajya Sabha Member; Who Will Replace Him?