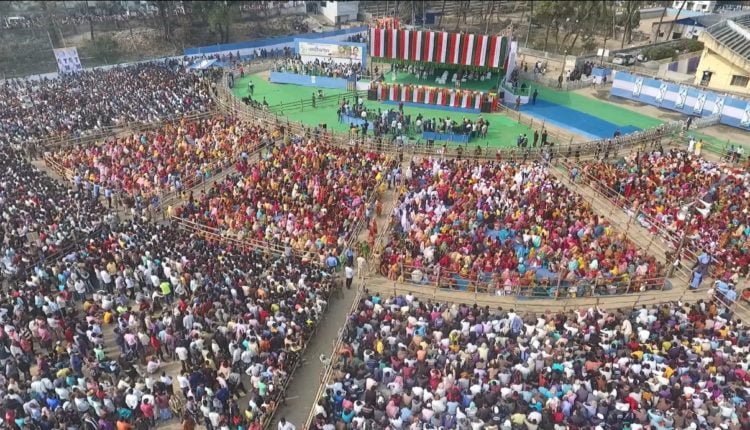 Kolkata: Determined to open her account in Malda district, Trinamool Congress chief Mamata Banerjee on Wednesday went all out to woo the tribal voters.

Speaking at a workers’ rally, she said she had been visiting the district since the time the grand leader of Malda, Barkatda (ABA Ghani Khan Choudhury) was at the helm of affairs. She has always stood by the locals whenever tragedy struck them. But she has never been the chosen one of the people of the district, she added.

“My grouse is that you come to see me and greet me, but don’t vote for me in the elections. In Lok Sabha polls and even in Assembly elections before that, we have not got any seats from here. This time I will not return empty handed, I want my hands full,” she said.

Reeling out her government’s steps for the tribal population, she said, “Who observes Birsa Munda’s birthday as a holiday? Who declared Raghunath Murmu’s birthday as a holiday? We did. We even observe the birth anniversary of Matua leaders. We give Rs 1,000 pension to those above 60 years of age under the Jai Johar scheme. In this year’s budget, we have decided to allocate funds so that we can provide Rs 1,000 to young widows. Give us votes so that you can continue to get free ration for life. We do not give false promises. We implement them.”

Addressing two back-to-back rallies in Raiganj in North Dinajpur and Malda, the chief minister, accused the BJP of spreading falsehood and creating riots. The BJP leaders have assumed the roles of deities and are travelling in luxurious buses converted into chariots.

“Now, they are doing rath yatra. The leaders are enacting the role of Lord Jagannath, Balaram and Subhadra. I want to ask them if their rath also represents the chariot on which Ravana had come to abduct Sita,” she said.

“Rath yatra is a religious occasion and it has sentiments attached with it. I will not tolerate anyone playing with religion. BJP is playing with the sentiments of Hindus,” she added.

Speaking on the raging issue of the farmers in distress, she said the farmers in other states are in agony, not in Bengal. That is because BJP has not been able to do anything here.

Covaxin Safe With No Serious Side Effects, Reports Lancet