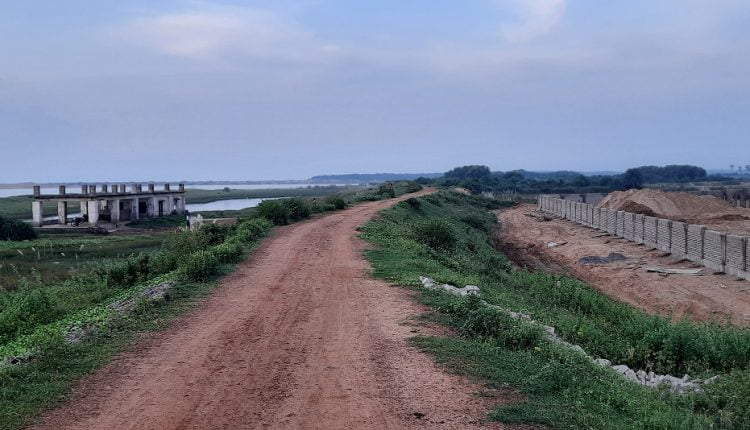 Berhampur: Environmentalists and wildlife experts have raised strong objection to the construction of a septage treatment plant at Palibandha, close to mass nesting site of endangered Olive Ridley at Rushikulya river mouth.

The Notified Area Council (NAC) of Ganjam has started construction of the septage plant at Palibandha in Ganjam district at a cost of Rs 2 crore. Local tehsil office has identified the 1.5 acre land for the plant.

The plant is located just 50 metre from the Rushikulya river mouth which is considered as the second biggest mass nesting site of Olive Ridley sea turtles in the country after Gahiramatha in Kendrapada district.

Besides environmentalists and wildlife experts, the local people have also strongly objected to the construction work of the tank as it has not been discussed or approved by the Gram Sabha.

Thousands of Olive Ridleys visit the five-km sandy beach from Purunababdh to Podampeta for mass nesting every year. If the septage plant comes up, it would spell doom for the endangered turtles, several wildlife activists and environmentalists said.

Dr Bivas Pandav, a wildlife expert of Dehradun, who made extensive surveys on Olive Ridley in Odisha, especially Rushikulya Rookery, said the treatment plant would force the sea turtles to go away from the river mouth.

“Any activities near the rookery will create hindrance in mass nesting of Olive Ridleys. The construction of the proposed plant also violates the coastal regulation zone (CRZ) norms which prohibit any construction within 500 metre of the beach,” said Biswajit Mohanty, secretary, Odisha Wildlife Society, a non-profit organisation. He urged the Ganjam district administration to stop the construction work at the proposed site and allot an alternative place for the plant.

Rabindra Nath Sahu, secretary, Ganjam District Sea Turtle Protection Committee, who has been spearheading a movement to protect the turtles for decades, also held the same view as he said the treatment plant would severely damage the mass nesting process of the Olive Ridley turtles.

“The treatment plant close to the mass nesting site in Ganjama will be a great threat to Olive Ridleys. We urge Chief Minister of Odisha to intervene and save the endangered species coming to the state,” said environmentalist JB Das on Twitter.

When contacted, Ronit Kumar, Executive Officer, Ganjam NAC, said the proposed site did not violate the CRZ norms as it was located away from the beach and the mass nesting site of the Olive Ridley turtles.

Amlan Nayak, Divisional Forest Officer (DFO) Berhampur said the permission from the Forest department is not necessary since the place where the plant is coming up is not forest land.