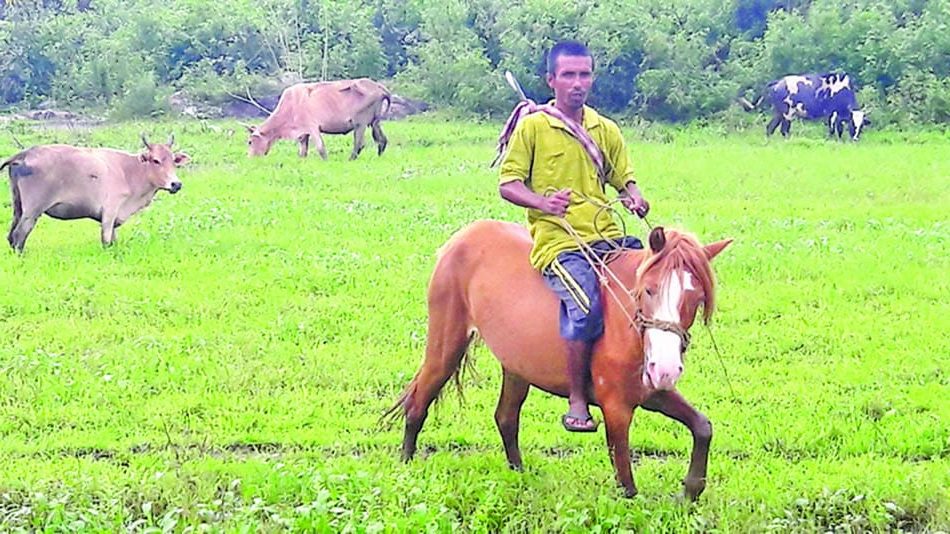 There was Lord Krishna, a cowherd who used to play the flute to keep his cows in good humour. And then there’s Krishna Mistry (35), who rides a horse to guard his herd.

While riding a horse is usually considered to be a hobby of the affluent in Odisha, Krishna, a small dairy owner in Malkangiri district, sits astride his horse to guard his cows while they are grazing in open fields. The horse has been specially trained to stop the cows from wandering too far away.

A resident of MV 42 village, Krishna says he was preparing for his matriculation exams when his father died. “This put an end to my education because the responsibility of my elderly mother and younger brother fell on my shoulders. In order to run the household, I bought 11 cows to run a dairy farm,” he said.

Once, during a trip to Andhra Pradesh, he had come across a cowherd riding a horse. Since then, he had been harbouring a desire to own a horse one day.

Eventually, he bought a horse and trained it to guard cows. The horse died after 5 years, leaving him heartbroken. But then, he came across a man selling a mare at Papadahandi in Nabarangpur district. He bought the mare for Rs 11,000 and named it Rani. He then also trained Rani to guard cows.

Rani is so well trained that even if Krishna returns home, it guards the cows diligently. Having Rani is a great comfort for Krishna, especially during monsoon when it becomes tough to herd the grazing cows in muddy fields. It helps him to ride on Rani to guard the cows, reports Prameya.

According to Krishna, Rani eats rice and roti like humans and has special weakness for peethas. Rani follows him the moment he steps out of his home.

Nowadays, he sells around 30 litre milk every day and earns around Rs 1,200 daily, making for a monthly income of Rs 36,000. He is married now and his wife helps him in taking care of the cows. What’s more, his two-year-old daughter too has got Rani as a friend.