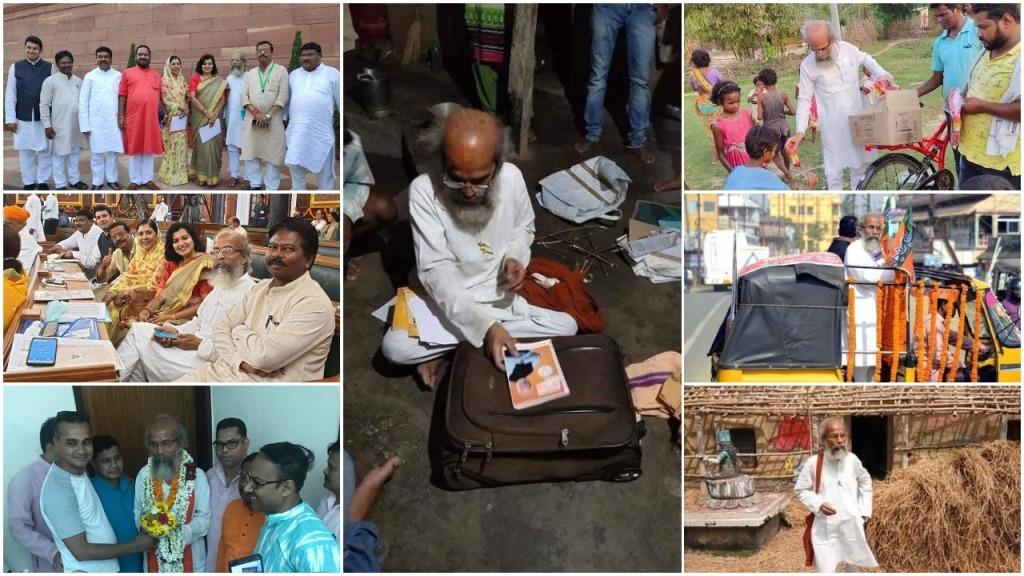 Bhubaneswar: Since being elected as the Balasore MP, Pratap Sarangi has been trending on microblogging sites with people hailing his austere way of life and calling him the Modi of Odisha.

The BJP leader avenged his 2014 defeat by crushing BJD’s outgoing MP Rabindra Jena by a margin of 12,956 votes in the recently-concluded general elections.

Introducing him as a grassroots BJP worker from Odisha, a Twitterati posted a picture of the MP in front of his mud house with thatched roof and wrote, “He is not married and his mother passed away last year. Very poor person and not having enough wealth to build his pacca house. Now he is ready to fly to Delhi. He won from Balasore Constituency, Odisha (sic).”

Sri Pratap Sarangi is grassroot worker of BJP from Odisha aka ‘Odhisha’s Modi
He is not married and his mother passed away last year. Very poor person and not having enough wealth to build his pacca house. Now he is ready to fly to Delhi. He won from Balasore Constituency, Odisha pic.twitter.com/4CZ8a8SXDq

A small kutcha house and a bicycle are his only possession, said another tweet.

He is Mr Pratap Sarangi, the newly elected as MP Odisha, BJP. He is packing his bag to go to Delhi. He is Odisha’s Modi. He has a small kucha house and a bicycle and nothing else. Salute to the indomitable spirit of this RSS man who defeated a billionaire like Rabindra Jena. pic.twitter.com/Ci7dPVFrhm

A Twitterati expressed her joy of seeing him going to Parliament. He had represented the Nilagiri Assembly constituency twice, from 2004 to 2009 and from 2009 to 2014.

For my non-Odia followers, this is the Balasore MP Pratap Sarangi that I often speak of.
One of my favorite BJP leaders from the state. Extremely happy that he is going to parliament 😊
You can follow him @pcsarangi https://t.co/RoZNrDimCT

People have also congratulated him on Twitter for the win and have tried to draw a contrast between the two candidates from varied backgrounds. While Jena, whom the Orissa high court granted anticipatory bail in connection with the multi-crore Seashore chit fund scam in January, has been dubbed a billionaire, Sarangi’s humble living is shared in pictures showing him campaigning in bicycle and an auto and packing bags to leave for Delhi in his small dwelling.

Sarangi never married, staying with his mother until she passed away last year. He has been a crusader against alcohol, corruption, social injustice and police atrocity.

A RSS member, he has opened many schools, called Samar Kara Kendra, for the poor  under the Gana Shikhsa Mandir Yojana in tribal villages of Balasore and Mayurbhanj districts.

He is considered close to Prime Minister Narendra Modi.