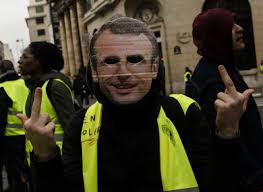 The spontaneous aid that is pouring in for reconstruction of the Notre Dame Cathedral in Paris, ruined in a recent devastating fire, has led to a bizarre turn of events. Saturday saw widespread protests and violence throughout France by the “gilets jaunes” or “yellow vest” protesters.

The yellow vest protesters are groups of French civil society who have been protesting against economic inequality for some months now, particularly the fuel hike and other fiscal injustice. They primarily represent the French middle class who do not qualify for social welfare schemes but are finding it difficult to maintain basic living standards, a socio-economic problem many Indian middle classes can identify with.

On Saturday, the yellow vest protesters added funding for Notre Dame to their list of grievances, making it very strange and controversial. The protest was against large companies opening their coffers for Notre Dame but not for the suffering poor middle-class citizens.

They protested against the massive outpouring of funds (close to over a billion Euros within just a few days) to rebuild the Notre Dame, thanks to the French government’s fervent appeal and donations from rich corporate houses.

They found the huge funds being made available for Notre Dame particularly galling at a time when the French government faced huge resentment from common citizens for imposing high taxes and other economic inequalities. They feel the government cannot now get away saying there is no money to curb social inequality.

During the protests, shops were looted and bicycles, motorbikes, bins and cars set ablaze. Police used water cannons and tear gas to disperse the crowds and took hundreds of yellow vest protesters in police custody.

Across the country around 10,000 people came out on the streets, 70 per cent in Paris itself. There were protests in Bordeaux, Toulouse, Marseille and Lille too.

French police deployed 60,000 personnel in different cities to deal with the situation.

The protests, because it involves a sacred place like the Notre Dame, became controversial, gaining universal appeal and relevance. It might, perhaps, be for the first time that a group was raising questions and protesting “against” funding to rebuild a religious place.

The basic question it raises is whether human interest should outweigh religious interest, a question which has been asked for ages.

Since time immemorial, some of the finest and most expensive art and architectural works created by Man have been dedicated to God. The richness and beauty to be seen in a temple, a church or a Gurdwara will always be par excellence compared to any secular building.

Man will give his best when it comes to God. The kings and the wealthy of the world have always laid out their riches for the supreme lord, in front of whom they also bow down and plead for greater bounty, safety and security.

It has always been the kings and queens, the rich and the wealthy who have helped establish and run places of worship. Also, it is this class of the elite, which, through its philanthropic activities, helps the poor and downtrodden whether it be in the field of health or education among others.

The problem arises when one has to make a choice between providing for the poor or for the needs of a temple. For many the temple and its needs are sacrosanct and must be fulfilled before any human being.

However, a contrary view by a number of spiritual and religious leaders is that human needs must always take precedence because when we serve the poor and the downtrodden, we actually serve God himself.

Mahatma Gandhi always held service in high regard and in his own words, “I am endeavouring to see God through service of humanity; for I know that God is neither in heaven, nor down below, but in everyone.”

It is in this context that the slogans by the “yellow vest” protesters – “Everything for Notre Dame, Nothing for the miserables,” “Millions for Notre Dame, what about for us, the poor?” – stand out.

Their single point was that a billion euros could be secured in just a few days for “stones” and nothing for the really needy, who have been protesting for months.

To really re-emphasise that the plight of human beings must not be forgotten while coming to grips with the tragedy of Notre Dame and fund collection drive for its reconstruction, an extremely moving slogan read: “We are all cathedrals.”

The fact that in the 21st Century and in a developed country like France the economically disadvantaged are agitating demonstrates that the plight of the poor middle class is virtually the same worldwide.

There is lurking suspicion among many that much of the spontaneous funding pledges by the rich may be with an eye on tax benefits.

A corpus is being collected in the name of Notre Dame’s re construction but these protests have definitely put a question mark on whether that is the best way to spend money, particularly when a section of citizens strongly feel otherwise.

French culture minister Franck Riester’s answer, that Notre Dame is not only a collection of stones, “it’s part of our identity”, pinpoints to the other side of the argument, as to whether any amount of funding will be adequate for the iconic UNESCO World Heritage site holding holy relics like the Crown of Thorns, fragment of the True Cross, and one of the Holy Nails, visited by 15 million people annually from all over the globe.

The answer is not an easy one.