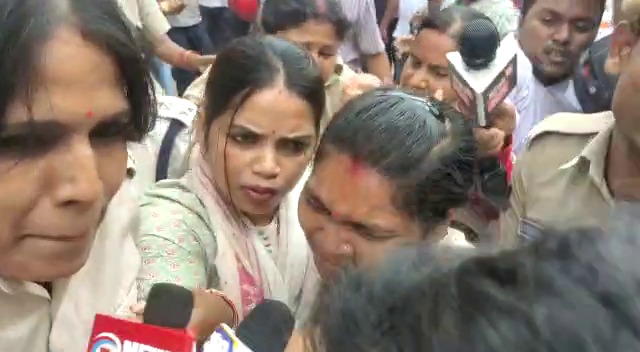 Bhubaneswar: Archana Nag, arrested for allegedly honey-trapping and extorting crores of rupees from influential people, appeared in Sub-Divisional Judicial Magistrate (SDJM) court here on Wednesday in connection with a blackmailing case filed against her by Odia film producer Akshay Parija.

While being taken to the court, she urged mediapersons, who had gathered in large numbers, not to broadcast false news without concrete evidence against her. “Please refrain from negative coverage, put your medium to good use. The truth will come to light after investigation,” she yelled through the melee as policewomen guided her through the crowd.

Her lawyer Debasis Mohapatra said that there is a need to stop the media trial against her and they would move a higher court against the rejection of her bail plea after receiving all the required documents. “She was arrested in connection with the complaint filed in Khadagiri police station, while she appeared today in connection with the complaint lodged by filmmaker Akshay Parija as per the procedure,” he added.

This is Archana’s first appearance in court since her arrest on October 6. Her bail hearing was conducted via video conferencing earlier due to security reasons and the court had then rejected her plea.

The kingpin of the honeytrap racket had allegedly demanded Rs 3 crore from Parija by threatening to leak his obscene videos. In his FIR, Parija mentioned that Archana identified herself as a lawyer and blackmailed him saying that she had obscene videos of him with her client. “Archana struck a deal with me at a posh hotel in the city and demanded Rs 3 crore from me. She threatened to kill me by cutting me into pieces if I did not oblige,” he alleged.

Parija filed the complaint with Nayapalli police after a woman accused him of casting couch.

The woman, in her complaint on basis of which Archana was arrested, said that the latter had given her Parija’s number in April this year and asked her to chat with him. She also recorded their intimate moments after the girl invited him to her house at Jagamara. When Parija refused the cough up the amount, Archana wrote a complaint in her name using her forged signature and sent it to Laxmisagar police station on September 22, the complainant added.

Archana had allegedly forced the woman into the racket by taking her nude photos after spiking her food.

Archana and her husband Jagabandhu Chand, who was arrested on October 22, are lodged at Jharpada Special Jail here. Jagabandhu’s bail has also been rejected.

Enforcement Directorate (ED) is likely to investigate the financial transactions of Archana and her husband Jagabandhu Chand, who reportedly amassed over Rs 30 crore assets, including a 3-storey palatial bungalow, in just over four years.