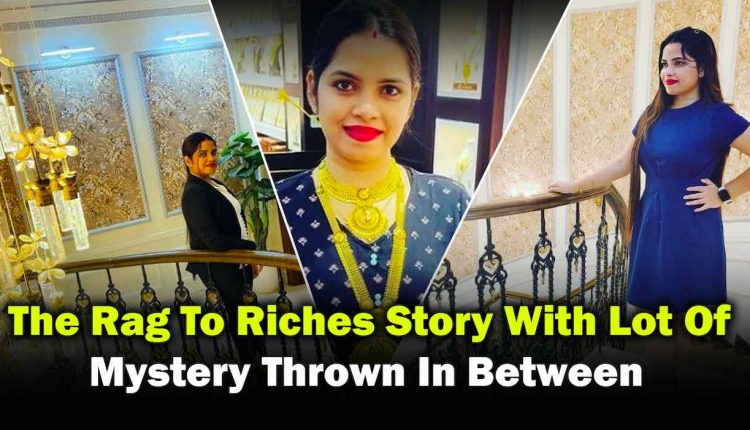 Bhubaneswar: The journey of honeytrap kingpin, Archana Nag, from Kesinga to Odisha capital is nothing short of a Bollywood potboiler interspersed with a lot of sleaze and mystery. The grand life included a three-storey bungalow in Satya Vihar here with extensive interiors, expensive vehicles, four dogs and a horse, which she along with his husband Jagabandhu Chand built in around four years.

According to police sources, the 26-year-old moved to Bhubaneswar to pursue integrated law after completing her school and college education at native Kalahandi district. That was in 2015. While police are not sure if Archana completed the course, she had a penchant for the good life and allegedly took the ‘illegal’ and immoral’ route to make a quick buck and lead a flamboyant lifestyle.

Initially, she worked at a private security firm and then allegedly ran a sex racket under the guise of a beauty parlour at Baramunda in the city. Archana and Jagabandhu’s paths soon crossed and driven by the desire to get rich quick, they found their calling in sextortion. He used to run a grocery store in Balasore district. The duo got married in 2018 and they started entrapping the rich and famous. Jagabandhu started developing contacts with politicians, industrialists and businessmen by introducing himself as a prominent member of a particular party. He and Archana would click photos with them and after, luring them into their trap, shoot intimate videos through spy cameras and blackmail them.

The couple stayed on rent in various places before moving to their palatial house in Satya Vihar last year.

Elaborating on Archana’s modus operandi, Bhubaneswar DCP Prateek Singh had told the media that she would befriend rich and influential people on social media, click their intimate photographs and then blackmail them for money. In the sextortion case involving Odia film producer Akshay Parija, she had engaged a girl, on basis of whose complaint police arrested Archana on October 6.

Archana had allegedly demanded Rs 3 crore from the filmmaker by introducing herself as a lawyer and threatened to make his alleged intimate video with the girl viral if he refused to cough up the amount. Parija refused to pay the money and instead lodged a complaint with Nayapalli police.

She reportedly minted lakhs of rupees from a Nayagarh native using the same modus operandi and the same girl, who was allegedly coerced to execute Archana’s plans. “If other blackmailed victims lodge complaints against her, we will initiate action,” Singh said, adding that they have received financial statements of Archana from a couple of banks and examining the same.