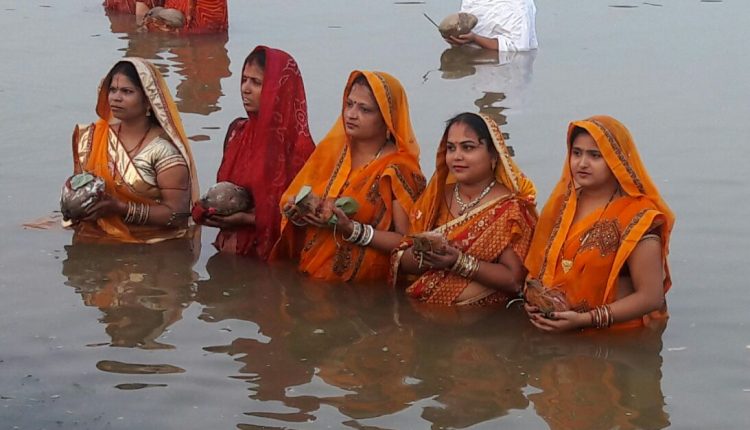 Bhubaneswar: Chief Minister Naveen Patnaik on Sunday extended greetings on Chhath Puja, which is being celebrated in its usual grandeur with devotees flocking to water bodies across Odisha to pay obeisance to the rising and setting sun, after a gap of two years due to COVID restrictions.

The Bhubaneswar Municipal Corporation(BMC) has allowed mass bathing in various water bodies and cleaned the banks for devotees to perform Chhath rituals. Tents have been put up on the banks of the Kuakhai river.

Bhubaneswar Mayor Sulochana Das visited the banks of the Kuakhai river on Saturday and directed officials to make arrangements for devotees so that they can observe the festival in a hassle-free manner.

The festival follows Diwali and Bhai Dooj starts on the sixth day of Kartik Maas, hence the name Chhath Puja where ‘Chhat’ means six. The puja is performed to deify and pray to the Sun. It is observed for four days in the states of Bihar, Jharkhand, Odisha, West Bengal, Uttar Pradesh and in parts of Nepal.

The significance of the rituals:

Devotees bathe in a water body on the first day. Along with cleaning their own body, they also clean their house and surroundings.

After the bath, prasad is cooked using ingredients like moong-chana dal, pumpkin, and bottle gourd. The women, called ‘Vrattis,’ observe fast and eat the prasad only once a day. Other members of the family will eat only after the vratti has eaten the prasad.
LOHANDA AND KHARNA

This marks a full-day fast by the Vrattis. After the sunset, the Vrattis prepare a special prasad called Rasaio-Kheer, eaten to break the fast. Devotees offer their prayers to Chhati Maiya and offer a special dish called Thekua.

Sandhya, in Hindi, means Evening. Therefore, Sandhya Arghya involves praying and resting at home. Folk songs are sung at the banks of the water bodies. During the sunset, devotees pray and then return home to enjoy Thekua, the prasad made of jaggery and flour.

A canopy made of five sugarcanes, representing five elements of Earth, is used as an integral part of the prayer. The ritual is known as ‘Kosi’ and is mainly followed by a family that has recently witnessed a birth or a wedding.

It involves offering prayers to the Sun, and all the religious rituals are performed during the dawn of the day. The devotees sit near the banks of the water until the sun rises. As the day breaks, the morning ‘arghya’ is offered by going in the water. The Vrattis break the fast by eating prasad and taking blessings from elders of the family on the last day of the festival.

Visa Racket: Youths Of Odisha’s Kendrapada Duped Of Rs 25 Lakh With Lure Of Jobs In Kuwait