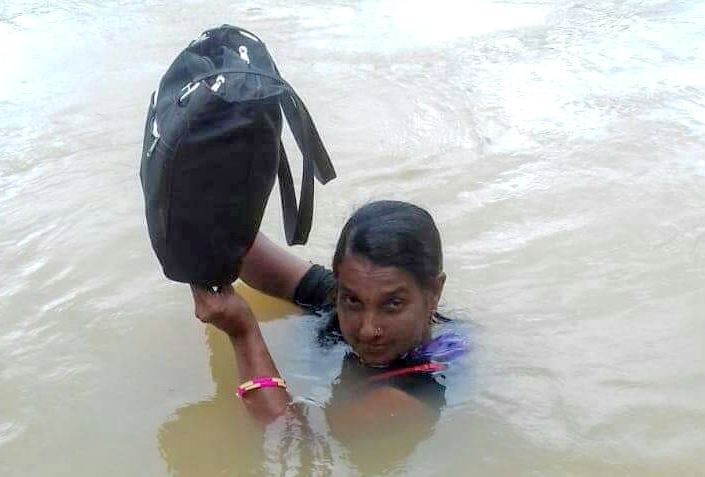 Dhenkanal: Where there is a will, there is a way. And so it is for Binodini Samal, a primary school teacher in Dhenkanal district.

The 50-year-old braveheart swims across Sapua river with neck-deep water during the rainy season to reach her school at Rathipala village in Odapada block. She has been doing so for the past 10 years, without a single day of leave.

More popular as Bini Didi among her students and fellow teachers, her dedication to duty has almost cost her life on several occasions. “Two years ago, I was thrown off-balance by the river current and drifted away for some time till I found solid ground,” she said.

She has been teaching in the primary school since 2008 as a ganasikshyak (a government appointed contractual teacher) and every day during monsoon she wades through the swollen river to report for work, “For me, work matters more than anything else. What would I do sitting at home,” she said.

After photos of Binodini crossing the gushing river went viral on Facebook, Union Minister Dharmendra Pradhan congratulated her in a tweet.

Though she has been working hard for so many years, her job is yet to be regularised. “It should have been done in 2016,” she rued.

Meanwhile, Dhenkanal Collector Bhumesh Behera said he was not aware of Binodini’s problem and he has sought the details.