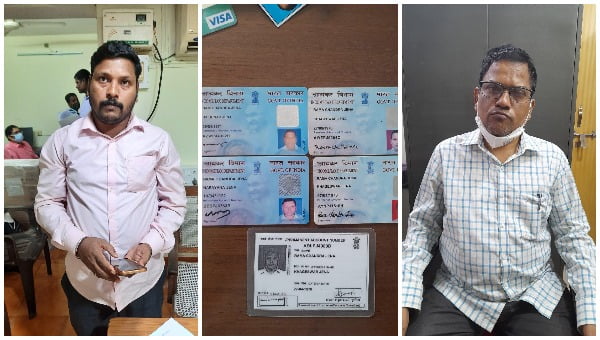 Puri: Nimapada tehsildar and in-charge sub-registrar Ram Chandra Jena and his brother, Laxman Jena, were arrested by Vigilance on Tuesday after the seizure of Rs 5 lakh and five PAN cards.

Laxman earlier worked as a truck helper, drove a taxi and then Mo Bus in Bhubaneswar. He is currently without a source of income.

During the investigation, he confessed to having travelled to Nimapada thrice in September and collected  Rs 2.5 lakh, Rs 5 lakh and Rs 2.5 lakh from his brother.

He then deposited them in his ICICI bank account in instalments. His bank passbook has been seized.

Around 9 pm on Monday, he received a telephone call from Jena, who asked him to collect Rs. 4.5 lakh the following morning.

While Rs 4.65 lakh from Jena, the team recovered another Rs 50,000 during searches at his government quarter in Nimapada. Simultaneous searches were also carried out on his properties in Cuttack and at his native place in Dhanmandal, in Kendrapara district.

Jena has been involved in two Vigilance cases in the past. One was regarding settlement of land and issuing patta. The chargesheet has been filed and a trial is pending. The other case relates to illegal conversion of agricultural land to non-agricultural land.