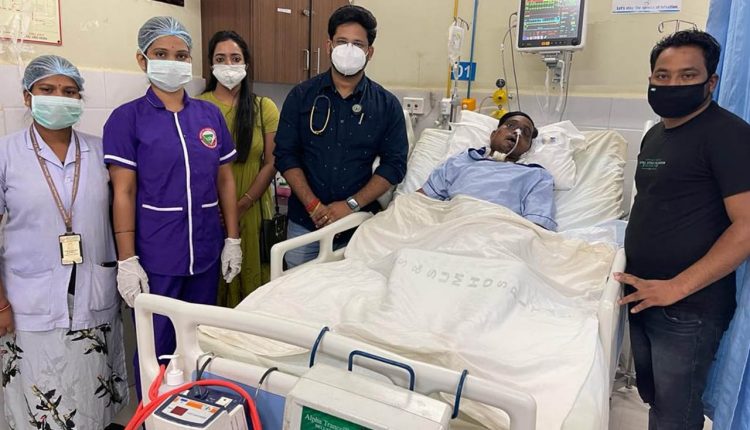 Bhubaneswar: Five weeks after being involved in a serious accident and slipping into coma, a 25-year-old youth has recovered after being treated in the neurosurgery department of Institute of Medical Sciences and SUM Hospital here.

Ketan Seth suffered serious injuries to the head and face in an accident which took place on the Jharsuguda-Sundargarh state highway on September 22.

He was rushed to a hospital, and was treated for 10 days at a number of government and private hospitals. But there was no improvement in his condition and he remained unconscious throughout.

When his family members almost gave up hope, he was shifted to the IMS and SUM Hospital thanks to local people and social media.

He was admitted under the care of senior neurosurgeon Dr Suryaprakash Choudhury and put on a ventilator.

According to hospital sources, Ketan had gone into coma due to severe brain injuries and internal bleeding. There were multiple fractures in several bones and the left eye was badly damaged.

Within three days of treatment under Dr Choudhury, the patient showed remarkable improvement and came out of the comatose condition.

Ketan’s brother Pinku Seth and other family members expressed their gratitude to hospital authorities and Dr Choudhury for the turnaround and steady progress he has been showing.

“Though it was a difficult case, we had not lost hope,” Dr Choudhury said. He thanked ICU in-charge Dr lswar Behera, other doctors and medical staff for their relentless effort to save the young man.

[Watch] What’s New This Diwali? Diyas Made Of Cow Dung From Cuttack!