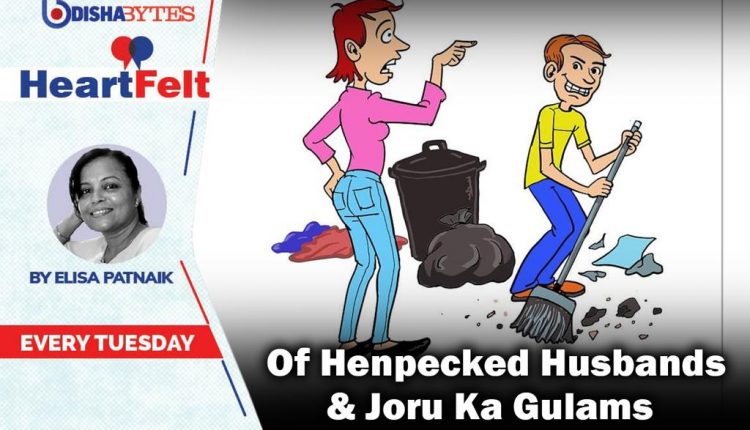 The tell-tale signs of a henpecked husband are all too familiar. Helpless, hapless, nagged, bullied, dominated images of husbands depicted in innumerable jokes widely shared and laughed upon, the exaggerated images and characters in the media and popular culture and also witnessed and derided within our own families and communities too.

As all of us know, henpeck is a word which has more negative connotations than positive, used more as an insult or a castigation — both to the husband who is henpecked and the wife who is henpecking.

The definition of henpecked is being browbeaten, bullied, or intimidated by one’s wife, girlfriend, etc. Examples: A henpecked husband who never dared to contradict his wife. To henpeck means to criticise, boss around, nag or dominate one’s husband. The term henpeck is applied to women or wives. The most commonly used derivation is the word henpecked, functioning as an adjective.

Interestingly, the expression henpeck is derived from the behaviour of hens, which peck and pick at each other in order to establish dominance in the flock. Not sure about the role and behaviour of cocks among the brood of hens though!

Henpecked husbands or Joru ke Gulams in the Indian parlance (slaves of wives!) are both subjects and objects of ridicule, pity and fun. They are derided for always ‘listening’ to their wives and being ‘dominated’ by them or not having an individual manly identity of their own. They are aberrations in our families and societies because husbands are not supposed to ‘listen’ to their wives or be ‘dominated’ by them and are expected to be their superior macho selves.

Of course, this is completely acceptable and normal if it’s the other way around. Wives are never ridiculed for ‘listening’ to their husbands, being ‘dominated’ by them or indulging them. After all, it’s an age-old practice. Also, it’s perfectly fine when the wives are considered inferior too. For that’s what women and wives are supposed to be.

The persona of a henpecked husband is age-old, spreading across cultures and countries. The henpecked husband is seen as a deviation from a typical masculine stature and ridiculed for showing male weakness. It’s as if by choosing to be henpecked, voluntarily or otherwise, the husband seems to have given up the fundamental symbols of manhood — strength, dominance, control and entitlement.

The henpecked husband is either portrayed as a frail and wretched figure always overshadowed by his domineering wife, or as a soft guy who is in awe of his wife, forever in love with her and can’t do anything without her approval. The former image is depicted as someone who does all the household chores, runs errands, does not have any interest or hobbies of his own — in short, a miserable, hapless man squirming under the thumb of his wife. People laugh at his misfortune and pity him too. The other variety of henpecked husband is seen as someone who fulfils his wife’s wishes and desires, hovering around her and ignoring even his family.

Being labelled as henpecked is something which every typical male fears perceiving as a loss of autonomy and independence. This perception and fear reinforces the construction of masculinity in families and societies. The trope of a henpecked husband is propagated as someone who shows extra compassion, concern, care – signs of a weak, spineless person.

Why do we assume that a man who cares for his wife’s happiness and well-being and is weak and does so by sacrificing his own identity? And what’s wrong in seeking advice from one’s wives and complying with it? After all, both husband and wife are supposed to be partners in a relationship. Can’t husbands fulfil their wife’s wishes, be caring and compassionate without being labelled as henpecked?

It is indeed hypocritical and preposterous when some husbands want their women to take charge, reap benefits from it and yet do not want to give them credit or accede to their opinion in public lest they be called wife pleaser.

Once a man marries, he is typically accused by his family and friends to have ‘changed’. The ‘change’ is supposedly because he spends more time with his wife, considers her important and listens to her. Some men in order to prove that they have not ‘changed’ or become henpecked, purposefully disagree with their wives.

This has been conditioned into a people’s psyche, that if a husband were to comply with his wife and agree to her views, then he is inferior or is being controlled by her. Indian men don’t shy away to comply with their wives privately or within closed doors but love to contradict on the same issue when they are with their families or in public. For the shame and embarrassment of acquiescing to their wives is too great for them to admit that their wives may after all may be dispensing the correct suggestion or advice. This is how patriarchy and Indian society continue to shape our men.

An average Indian man can be a model son, model father, model brother but not a model husband. Husbands agreeing with their wives is seen as an anomaly in our society. Calling men Joru Ka Gulam if they listen to their wives or pay heed to their suggestions, is a common practice. Men who are supportive of their wives tend not to do so openly because of peer pressure.

This also highlights the inequality in marriages in our society. It’s no problem when women are always dominated by their husbands, literally spend a lifetime lives doing domestic chores and nurturing duties. Moreover, it is seen as a woman’s job to support her husband in achieving success and fulfilling his dreams. But when a man does the same he is labelled as henpecked.

Somehow, being nice to his wife and in-laws means he is neglecting his own family. But when a wife listens to the husband all the time, is obedient and takes care of her in-laws, she is the epitome of a good wife!

Any man who refuses to dominate his wife is shamed for not doing so, sometimes labelled as ‘failures’ and ‘loser.’ According to the norm set by patriarchy, wives are supposed to be subservient and submissive. Imagine a man being shamed for agreeing to his wife, supporting his wife and treating her as an equal!

I admire those select few men who do not have any qualms being a caring husband or being labelled as henpecked. Men who are secure and confident of who they are and do not need external validation or labels to prove otherwise. They have a happy married life and are not afraid to show the world that they appreciate and respect their wives.

The word henpeck insinuating to the nagging, pesky and manipulative behaviour of wives not just demeans women but also propagates patriarchal norm of male superiority. Let’s celebrate, admire and support confident, considerate and progressive husbands and wives who treat each other with love, dignity and respect. Let’s stop spreading and laughing at misogynistic and regressive jokes at the expense of henpecked husbands.