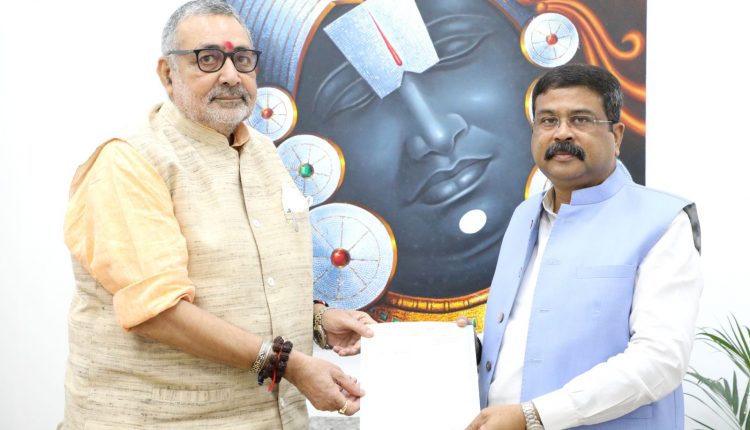 Bhubaneswar: Union Education Minister Dharmendra Pradhan on Friday urged the Centre to allow Odisha to migrate the data of eligible beneficiaries from Rural Housing Portal to PWL of Pradhan Mantri Awaas Yojana-Gramin (PMAY-G) by opening the Awaas+ window to include eligible poor families in a transparent manner.

Pradhan, who hails from Odisha, met Union Minister of Rural Development and Panchayati Raj Giriraj Singh and submitted a letter in this regard.

In his letter, Pradhan claimed that the data transfer will open the door to a life of dignity for the poorest of the poor in dire need of housing in Odisha. He also emphasised the need for rigorous monitoring of the entire process so that no eligible beneficiary is left out.

Noting that the Centre had launched PMAY-G in November 2016 to ensure pucca houses for the economically weaker sections of the society, Pradhan said the initial target was to construct 2.95 crore houses across the country.

He said the Centre has extended the scheme till 2024 with additional budget grant of Rs 1.25 lakh crore. The target has also been revised to include additional 93 lakh families in the scheme.

Till date, as many as 1.9 crore houses have been built across the country under the scheme, while in Odisha, around 27 lakh families have been included under PMAY-G, the letter said.

Investigations by the Ministry of Rural Development have shown several irregularities in the implementation of PMAY-G in Odisha, including exclusion of eligible people from the waiting list, duplicate entries in AwaasSoft, tampering of PMAY-G logo on many houses and issues related to transfer of funds to the beneficiaries and disproportionate allocation of houses among the districts, he claimed.

“Families affected by cyclones and floods in the coastal districts of Odisha are still waiting for their inclusion under the housing scheme. Similarly, many families in the southern and western Odisha are yet to get houses under PMAY-G due to delay in geo-tagging and other technical issues,” Pradhan said in his letter.

“There is a need for rigorous checking to eliminate chances of duplication of beneficiaries between the PMAY-G and state housing scheme,” Pradhan stressed.