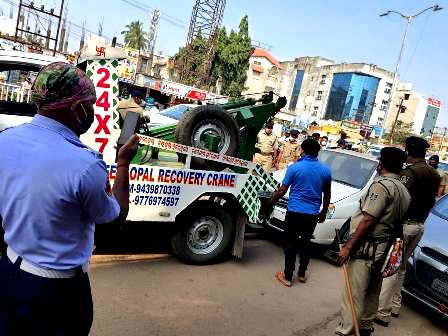 Bhubaneswar: The Commissionerate Police on Saturday launched a special drive in the state capital to remove the abandoned and unattended vehicles parked in public places and roads.

Talking to the media, DCP, Traffic Soumya Mishra said the police towed away six such vehicles parked between Kalpana Square and Station Road area. The drive was underway in the underpass in Baramunda area. The initiative will be extended to all parts of the city in the coming days, she added.

The drive was launched following complaints that the abandoned vehicles occupied space on the roads and led to traffic problems and accidents, the DCP said.

She further said the police have informed the owners of such vehicles over phone and on public announcement system to immediately remove their vehicles from the public places failing which those will be towed.

Besides, the owners were warned that they will have to pay the fine and the towing charges. The police also said the owners will be responsible for the damage rendered to their vehicle during the towing.

“We request the owners to refrain from such unauthorised parking of their vehicles as those are causing obstruction to the free flow of traffic,” the Traffic DCP said.