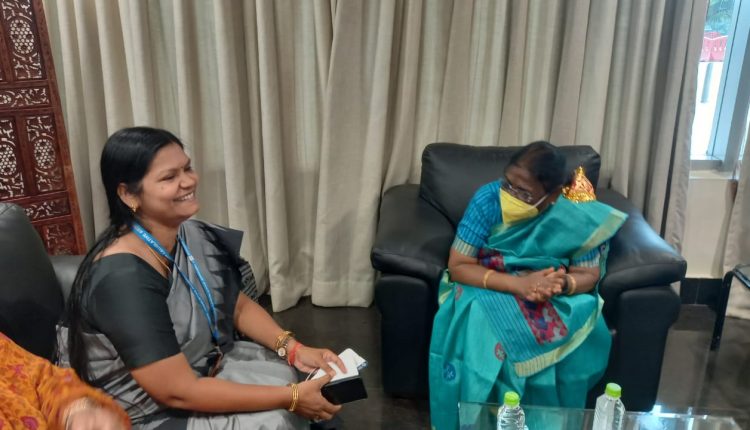 Bhubaneswar: Even as NDA presidential candidate Droupadi Murmu was given a rousing send-off at Bhubaneswar airport as she left for Delhi, Chief Minister Naveen Patnaik on Thursday tweeted about his telephonic conversation with BJP national president JP Nanda.

Cabinet ministers Tukuni Sahu and Jagannath Saraka also left for Delhi. this morning. They will sign Murmu’s nomination documents and will also be present at the time of nomination filing, the CM informed.

BJP President Shri @JPNadda ji spoke to me about the filing of nomination of Smt #DraupadiMurmu ji for #PresidentElection. My cabinet colleagues Shri @saraka_fan and Smt @TukuniSahu will sign nomination papers today and attend the event tomorrow.#OdishaLeads

The tweet also confirmed that Murmu will be filing her nomination papers on Friday.

The BJD is the first non-NDA party to extend its support to Murmu for the highest constitution post. The CM has also urged all MLAs of the state, cutting across the party lines, to vote for the ‘Daughter of Odisha’.

Once elected, Murmu, who holds the distinction of becoming the first woman Governor of Jharkhand, will become the first Odia, and the first tribal to occupy the president’s chair. She belongs to the Santhal community in Odisha’s Myurbhanj district.

The 16th presidential election is scheduled for July 18 and the counting of votes will take place on July 21.