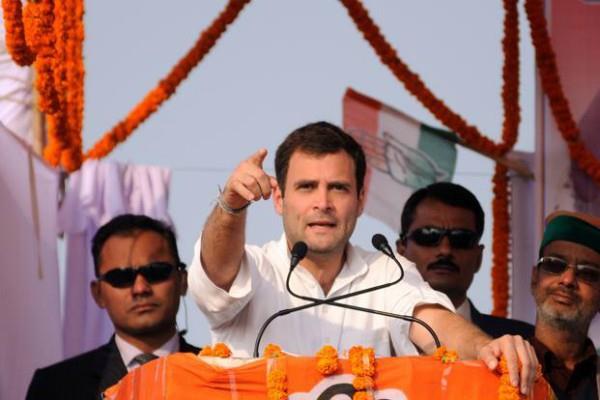 Addressing a rally here, Rahul targeted Odisha Chief Minister and BJD president Naveen Patnaik and Prime Minister Narendra Modi for reneging on their promise to provide relief to farmers and job creation. Bargarh, he said, was once known as the rice bowl of the country, but not anymore. He claimed that farmers are committing suicide every day in the state.

Taking on Naveen on the chit fund and mining scams, he said his party will deliver justice to victims of scams and punish those who have robbed investors of their hard-earned income.

“I do not make false promises of depositing Rs 15 lakh into your bank accounts or generating two crore jobs every year, but I assure farmers that out government, if voted to power in Odisha, will build cold storages across the state, provide minimum assured price of Rs 2,500 to farmers, give back land to displaced people and waive off farm loans,” he said.

Chhattisgarh Chief Minister Bhupesh Baghel joined the rally, where he came in for praise from Rahul for waiving off farm loans within six hours of becoming the state’s chief minister.

This was Rahul’s fourth visit to Odisha this year. The Congress chief had visited Bhubaneswar on January 25, followed by Bhawanipatna in Kalahandi district and Rourkela in Sundargarh district on February 6, and Jeypore in Koraput district on March 8.

In his speech, Rahul talked about providing every citizen the right to affordable treatment and said his government will invest more in the education sector so that students do not have to pay exorbitant tuition fees.

He said the existing GST regime will be made much simpler and flat with one tax slab.

5 Loot Ornaments From Couple On Morning Walk In Odisha Capital