Dhenkanal: Even as three chariots of the deities of Jagannath temple in Puri rolled down the Grand Road on Tuesday following the Supreme Court order, the rituals of the Rath Yatra were performed inside the Shree Siddha Balaram Jew Temple in Dhenkanal district without devotees.

The rituals of the festival were performed while adhering to the COVID-19 guidelines. Only a few servitors were allowed to remain present in the temple to carry out various works on the occasion.

Sanitizers and handwash were placed at the entrance of the temple and thermal screening of servitors, media personnel, police personnel on duty was done.

Earlier, the district administration had imposed Section 144 around the temple to restrict the public from going inside the temple. The restriction will remain in force till Bahuda Yatra. 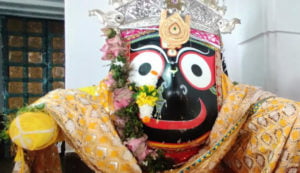 “All the rituals were performed amid COVID-19 guidelines. Only six servitors were permitted to beat the cymbals while 10 of us were allowed for Pahandi rituals,” said a servitor, Sandeep Sarangi.

Prior to Pahandi, Sakala Dhupa, Mangala Arpana, Surya Puja, Snana Marjana, and Ballava were performed in the temple. Amid the blowing of conch, trumpet, and beat of cymbals, Dhenkanal prince Amarjyoti Singh Deo participated in the rituals as per the tradition.

“As per instruction of the Supreme Court, there was no chariot pulling. Since the rituals were allowed on the temple premises, those were performed. Only a limited number of servitors are permitted till the Bahuda Yatra,” said district collector Bhumesh Chandra Behera.

The Rath Yatra in Dhenkanal was started by the erstwhile king in 1690.

Hundreds Of Journalists Sacked: What Is The Future Of Indian Media?