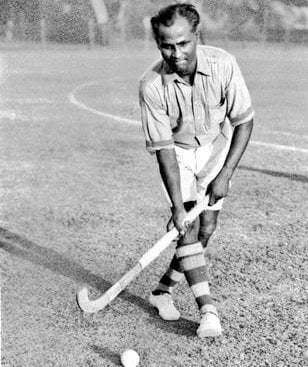 What can you say about a man who rose from the simple rank of a sepoy of Indian Army to a global legend? That he was as famous in the dusty streets of Allahabad and Jhansi as he was in the lusty lush green fields of Berlin and Brussels. That he made the ball talk not by the sleight of hand but by flawless stick work that many mistook as the handiwork of a magician rather than simple ‘ball play’ which he had mastered through hours of toil and practice. And that the undisputed king of hockey died a pauper.

That was Dhyan Chand the wizard who was the most dominant figure in World Hockey from 1924 to 1948. However, no one knows when and how the epithet ‘wizard’ got stuck to his name. But it has continued to define the hockey legend even after 40 years of his demise.

We grew up as kids in the 50s when Dhyan Chand had already passed his prime, but the legend was very much there and still growing. We had then as any other world class sportsperson here to whom we could look up as our ‘idols’ or ‘role models’, barring a rare Ramnathan Krishnan, or Wilson Jones, Lala Amarnath or even a Mewalal. But the list was dismally short. And so the peerless Dhyan Chand’s exploits in the World Hockey during the 30s and 40s about which we had learnt and read from innumerable books, periodicals and magazines provided us with great excitement, joy and a mood to go gaga over a sporting legend.

As I grew up, I read more about sporting heroes. Few of my earliest collections of biographies were those of Sir Don Bradman’s ‘Farewell to Cricket’. Pele’s ‘My Life and the beautiful game’, Garfield Sobers’ ‘Cricket Crusader, Mohammad Ali’s ‘The Greatest-My own story’, ‘Tiger Tales’ by Nawab of Pataudi and few similar books. But unfortunately, despite all of my efforts, I could not lay my hands on Dhyan Chand’s ‘Goal’ which still remains one of my greatest regrets.

Superlatives always seem limited to describe the on field exploits of someone of the stature of Dhyan Chand. But not so for his countless fans, who delight in superlatives to describe their hero. Perhaps the biggest accolade had come from another sporting legend Sir Don Bradman. The legendary cricketer is believed to have once remarked: “Dhyan Chand was scoring goals like they score runs in cricket”. Can there be a better appreciation for his goal scoring ability or a bigger recognition for this genius?

I was fortunate to have spent a few precious minutes with this wizard of hockey. It was way back in the early 70s while I was attending the Utkal University hockey coaching camp at Satyabrata Stadium, Cuttack. One afternoon, the attention of all the campers was drawn towards a person sitting in the most calm and casual manner on a lower step of the gallery. The dark, diminutive, clean shaven man with a receding hairline was looking at us curiously. It was one of the rarest sights, the dream of every budding hockey player—the doyen of the game, Dhyan Chand was there in flesh and blood and watching us from almost a hand-shaking distance. Some of the trainers went near him and touched his feet.

Then mustering all my courage, I asked him, “Sir, did you really use any magical power while playing hockey? Did the foreign press describe it as magic wand? Are you really god-gifted?” With great humility and in a soft voice, he replied: “No these are the creations of the media. I was just a normal player who loved hockey. By practicing 10 to 12 hours every day for years, I had mastered the finer skills of the game. Anyone can acquire these talents by hard work and dedication and then you will receive God’s grace. Anyone of you can be a great player by adopting this simple principle.”

The message was well taken. But it also left us pondering. Was this simple man the same who had almost single-handedly pulverized the pride and vanity of the so called ‘Aryan Supremacy’ of German dictator Adolf Hitler by inflicting the most humiliating defeat to the German hockey team in the 1936 Berlin Olympics final. The score line read India-8 and Germany-1. The annihilation was complete. The prophet of hockey reminds us of the simple truth, “Simplicity is the hallmark of greatness”.

In recognition of the immense contribution of Dhyan Chand to hockey, the government has declared his birth anniversary, August 29 as National Sports Day and instituted the ‘Dhyan Chand Award’ given to a sportsperson for lifetime achievement.

But unfortunately, persistent appeals by sports lovers, parliamentarians and eminent sportspersons to honor Dhyan Chand posthumously with the country’s highest civilian honour ‘Bharat Ratna’, it continues to elude one of the greatest icons of the 20th Century. And the reason is best known to those at the helm of affairs.

(The writer is a former sports administrator)

Disclaimer: The views expressed in the article are of the writer and does not necessarily reflect those of the web portal.