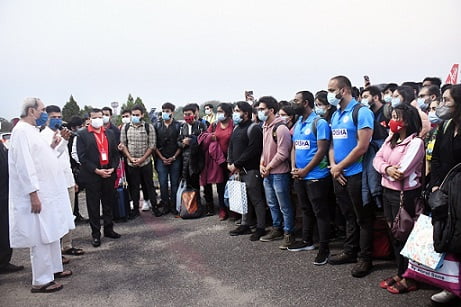 Bhubaneswar: The hopes of a group of students from Odisha, who are stuck in war-torn Ukraine’s Sumy, of an early evacuation have been dashed after India said that despite repeated pleas to both Russia and Ukraine, a “safe corridor for our students stranded in Sumy has not materialised”.

Meanwhile, according to latest reports, Vassily Nebenzia, Russia’s UN Ambassador, promised a fresh ceasefire for Tuesday, claiming that civilians will be able to select “where they wish to be evacuated to”.

The Indian Embassy sent four buses to Sumy but none could move beyond the town’s borders, The New Indian Express reported.

Five students from Odisha are stuck in this town without food and water. They are Smruti Ranjan Nayak, Gouri Shankar Parida, Tapan Kumar Bugudei, Biswajit Das and Suman Mahanta. All are students of Sumy State Medical University.

Over 700 Indian students are trapped in the university.

Sumy is closest to the Russian border and the nearest airport is Belgorod in Russia.

Bugudei, who is from Balasore, told TNIE that they were told buses would arrive to take them to Poltava, around 175 km from Sumy.

“At first four buses arrived. Girls were asked to board first. When we were about to board the fourth bus, we were told bombardments have started again,” he told TNIE.

Earlier, the five Odisha students had filled up a Google form following a fresh advisory by the Indian Embassy on Sunday and have since been waiting for help. They just had a water tanker, bread and eggs, which they received from an Indian national who runs a pharmacy in Sumy, and still had to melt ice and stock it for consumption.

Seventy-seven students, who were evacuated from Ukraine, arrived in Bhubaneswar on Monday evening on a special flight arranged by the Odisha government.

Chief Minister Naveen Patnaik was at the Biju Patnaik International Airport to receive the students, who safely returned home. He also interacted with them there. He assured them that efforts would be made to allow them to continue their education.

Prime Minister Narendra Modi on Monday spoke to Ukrainian President Volodymyr Zelensky and sought his support for the evacuation of Indian students stuck in Sumy.