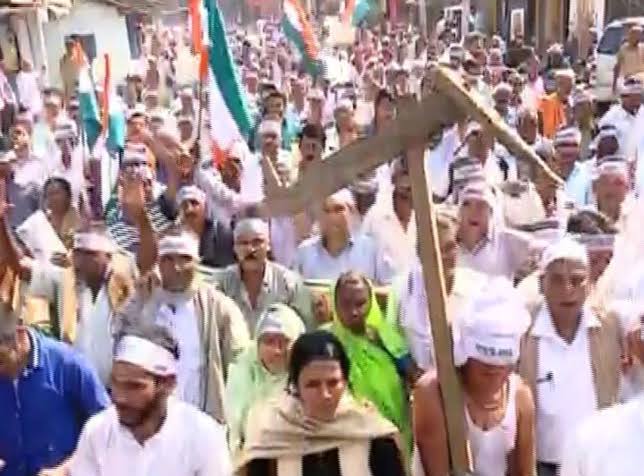 Share
Bhubaneswar: With the Naba Nirman Krushak Sangathan (NNKS) scheduled to convene a mega convention of the farmers in Bhubaneswar on Monday, the administration has clamped prohibitory order along the National Highway, on the outskirts of the city, to block the entry of the leaders and activists of the outfit into the city.
While the NNKS activists are on a pada yatra to Bhubaneswar from Cuttack and Khurda, the administration has clamped the prohibitory order at Hansapal and Tamando. The pada yatra from Khurda is led by the former Congress MP Pradip Majhi, and the rally from Cuttack by NNKS national convener Akshaya Kumar and former Kendrapara MP Baijayant Panda.
“The pada yatra started last week, but the state government has shown no concern towards the farmers despite repeated demands. We are on the way to Bhubaneswar. If the government fails to fulfil the demands of the farmers by tomorrow, they will paralyse Odisha and the Odisha capital,” Majhi said.
The NNKS is demanding minimum of support price (MSP) of paddy at Rs 5000 per quintal, monthly pension at Rs 5000 for the youth and Rs 1500 for the elderly.
“The state government since last 18 years has not constructed a single mega irrigation project. One mega irrigation project should be set up in each district,” said an activist.
FarmersNNKSSec 144
Share FacebookTwitterGoogle+ReddItWhatsAppPinterestEmail

Seminar At RD Varsity Brings Out The Connect Between Technology & Literature