Snake Or Shortage of Anti-Venom Vials? What Killed Lioness Of Bhubaneswar’s Nandankanan? 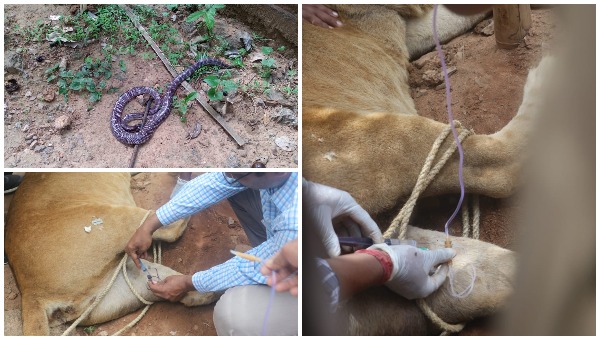 Bhubaneswar: Less than a week after the attack on tourists from Chhattisgarh in Nanandkanan, the zoo authorities found themselves embroiled in another controversy following the death of an African lioness due to snakebite here on Saturday.

The lioness allegedly died due to lapses on the part of the zoo authorities in providing proper treatment to the feline.

Refuting the allegation, Nandankanan Deputy Director Sanjeet Kumar told the media that the lioness was administered three vials of anti-snake venom (ASV) and they had a stock of 5 to 6 vials. The postmortem will reveal the exact cause of the death, he added.

Honorary Wildlife Warden of Khurda Subhendu Mallick, however, said the venom of Common Krait, which reportedly bit the lioness, is neurotoxic and the Government of India and WHO protocols clearly state that the first dose of 10 vials should be administered to the victim over an hour. “The zoo did not have adequate stock of ASV. This is a violation of the Central Zoo Authority guidelines. When the condition of the lioness deteriorated, forest guard Ramachandra Kandi was sent to a nearby private hospital to purchase more vials of ASV. This is a very serious matter. Had the ASV stock been there, the life of the animal could have been saved,” he said.

He alleged that the lioness died due to negligence of the Director, Deputy Director, Range Officer Sanctuary Management, and the Veterinarians of the zoo. “We lost it because they cumulatively failed to maintain the stock of ASV in the Zoo hospital,” he said.

Mallick further said the postmortem should be conducted by a government veterinarian posted outside the zoo and monitored by Forensic Medicine & Toxicology experts from AIIMS, Bhubaneswar.

“The postmortem is crucial because snakebite is a medico-legal case (MLC). Veterinarians of Nandankanan Zoo can’t do it since they have provided treatment. Since the Centre for Wildlife Health of OUAT is funded by Nandankanan Zoo, there will be a conflict of interest and an impartial postmortem cannot be expected from them,” he said.

According to sources, the African lioness aged 15 years was brought to the zoo from Israel in 2015. It was being kept in enclosure-30 (B).

Women SHG President Locks Up 81-Year-Old, Thrashes Her In Odisha’s Kendrapada; Know Why