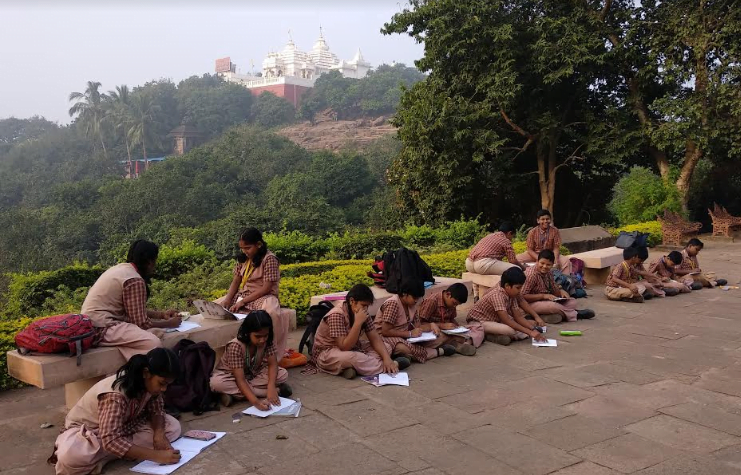 Bhubaneswar: One of the best methods to learn and understand history, is to experience and visit these sites. Bhubaneswar has been following the same since some time as on Saturday, about a hundred students from city-based Amrita Vidyalayam joined the heritage walk at Udaygiri and Khandagiri.

Exploring the rock-cut caves and listening to the tales, several students also took their paint brushes and pencils to restructure the caves on their canvas.

Subhangi Mohanty, a student of Class IX, was fascinated to know the stories behind the rocky wonderland. “I have been here several times in the past, but never had an opportunity to know the interesting stories behind. I will definitely come again and join the walk,’’ she said.

While student Mayank Pattanaik thought the day was full of knowledge, Saloni Priyadarshini said she felt lucky to be a part of it. “The guide told the stories behind Emperor Kharavela, his empire and how once the kingdom of Kalinga had a dominance over 40 per cent of the landmass of the sub-continent,’’ she said.

The children were briefed about the history of the caves, the hilly terrain and the influence of Jain religion and other stories of Emperor Kharavela and his kingdom.

Principal Mousumi Pattanaik said the experience was special. “I had visited the caves four times in the past, but the information we gathered today was very interestingly told and all the students and teachers enjoyed their time, especially, at Udayagiri. Even on the Khandagiri Hills the priest beautifully explained the story of Goddess Barabhuja,” she said.

Lawyer Among Three Held For Hawker’s Murder In Ganjam