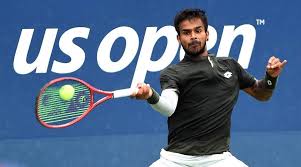 Nagal thus became the first Indian in seven years to win a singles match in the main draw of a Grand Slam event. Somdev Devvarman was the last Indian to do it, in the 2013 US Open championship.

Exactly a year ago, Nagal had qualified for his maiden Grand Slam event, and even won a set against the great Roger Federer before going down in the opening round of the US Open.

On Tuesday, Nagal was not to be denied as he dominated Klahn, the former world No. 63, to win in four sets. The 23-year-old Indian, ranked 124th in the world, will next play world No. 3 Dominic Thiem, who was leading 7-6 (6), 6-3 when Spanish opponent Spaniard Jaume Munar retired.

A delighted Nagal took to Twitter to celebrate his first Grand Slam victory.

My first Slam win. It was definitely a special moment and a match I will not forget. Thank you everyone for the wishes❤️

Next match on Thursday, gonna be a fun one 🙃

Nagal is the only Indian in this year’s US Open singles main draw. He recently joined Novak Djokovic’s new Professional Tennis Players Association (PTPA) along with compatriot Rohan Bopanna.

Sumit Nagal was literally all over the court today 🏃‍♂️@nagalsumit I #USOpen pic.twitter.com/M3D3f2aHIn