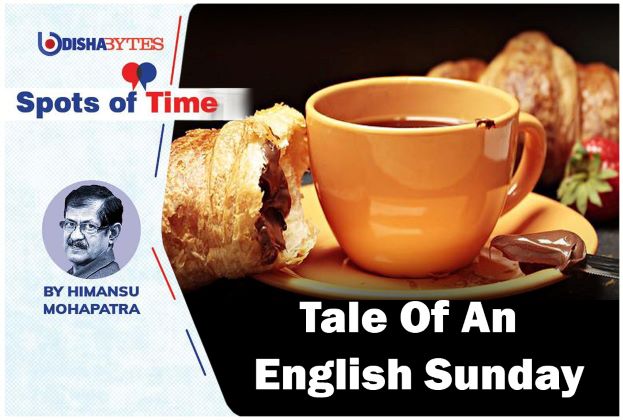 Sundays slid on listlessly on the campus all through the summer of 1987. Shops and stores being closed, there was nothing to do, at least not for the miniscule community of overseas Indians studying at UEA.  Sunday for them was the last rapidly dissolving frontier of a long weekend break.  The whirligig would turn and soon it would be OGIMA time.

RP Rajan, a new arrival from India at UEA, asked Subrat who was thought to be up on the local lore, with his head start of two years at UEA.

Subrat had another plus. His 13 Suffolk Walk flat was a furnished family accommodation. Its most attractive feature was the French window-size sliding window panes on the back that commanded a panoramic view of the lush and sprawling grass, leading up to the placid waters of the UEA broad. It was something of a luxury. He had been perched there for over a year with his wife and daughter.

Most other Indians in UEA, manifestly doing their one-year Masters in Development Studies, but actually on their foreign jaunt, stayed in cramped study bedrooms, like Subrat did when he first came by himself in 1985. Subrat didn’t mind his brief time in the sun in the form of being envied by these people who on the home turf would be staying in 6-bedroom bungalows, serviced by a retinue of attendants. They cursed UEA administration for having been meted out such a raw deal. One of them, a senior member of the IAS, who had just gone back home, had these parting words for the country which hosted him: “I’ll squeeze the living daylights out of any Englishman that crossed my path in India.” He had anticipated the James Bond movie of that name by more than a year. And what was the country’s fault? That it had seemingly rid social and civil life of pecking order.

So it happened that on Sundays when the Brits went to church, dressed in their Sunday best, and returned home to their dinner of roast pork and boiled potato, carrot, sprout, the Indians congregated in Subrat’s 13 Suffolk Walk flat to indulge in their favourite pastime of British-bashing.

The group assembled in Subrat’s house in the morning hours. Safely ensconced within and buoyed up by umpteen cups of tea, they chipped away at all the chips that the English supposedly carried on their shoulders, their ‘thank yous’, ‘sorrys’, included. The new arrival, RP Rajan, was particularly vocal of late. Having had his bureaucrat’s ego flattened under the leveling English norms, he found fault with everything English, starting from did-dip tea—he referred to tea bag-infused watery tea as did-dip tea—to boiled veggies that caused consternation—he preferred to call constipation consternation.  He came down hard upon the social custom that was such a welcome relief for Subrat, namely, standing calmly in a line to draw money from bank or to receive mail from the mail room. He also didn’t like the idea of meeting his supervisor through a prior appointment. It may be fine for the undergrads, but for senior officers like him it was downright insulting, he said. For him Kalidas would beat Shakespeare hands down any day and Sankara would trump Kant, the only Western philosopher he claimed to have any respect for.

Subrat’s Eng-lit training made him a rather unenthusiastic participant in this Sunday sport. Rajan, who shot down one British target after another, as he fired away in his Tamil-accented English, took umbrage at Subrat’s suggestion that for all their carping and cribbing, Indians were not proof against England’s insidious charm. Anyway, this was the unvarying Sunday ritual performed at 13 Suffolk Walk all through the summer months of May and June. The first Sunday of July, however, changed all that.

The doorbell buzzed fairly early in the morning. Swarnima opened the door. The group was there in full force. Before she could say “Come on in”, Rajan walked right in, followed by the rest. He went to the far end of the living room and turned the telly on. Sliding into the couch, he motioned to others to sit themselves wherever they could, on the couch or on the carpeted floor.

“There’s nothing on so early on a godforsaken English Sunday, you know,” Swarnima said.

“You bet,” said Rajan. “Where is our anglophile?” he demanded. Subrat quickly emerged from the bedroom and joined the bashers.

“So which target on the firing line today? Must be a big one that has been missed earlier,” he asked.

The TV came alive at this time. The name of the programme flashed on the screen. But what was this? Did they really see what they were seeing? Movie Mahal. A hush fell over the room. The voice-over was beckoning them to a 3-month long tryst with the astonishing richness of Indian cinema through a selection of its bewitching song and dance clips. The programme, a creation of Nasreen Munni Kabir, would air on Channel 4 every Sunday at 9.00 am and continue for the next twenty-four Sundays. Subrat immediately pressed the ‘record’ button in their newly purchased Hitachi VCR.

The opening episode of Movie Mahal unfolded before the hypnotized lot. For next half hour, the ‘golden oldies’ of Hindi cinema, taking on form and colour, came cascading down from the TV screen.

“What a dainty dish for the Brits to serve us on a Sunday morning? I won’t miss India anymore,” quipped Rajan.

That cue from the fallen leader made the others fall in line. 13 Suffolk Walk resounded with an effusive love for England that Sunday.

Sunday Blues And Our Perpetual Fight With Procrastination

Fan Power Vs Mob Power: Lesson From The Crazy Response To Pathaan