Berhampur: The biennial festival of Budhi Thakurani, which is popularly known as ‘Thakurani Yatra’, kick started in the Silk City with strict COVID-19 guidelines on Saturday.

The 7-day-long yatra started with the arrival of ‘Aagyamala’ (the deity’s floral sign) after the city’s presiding deity reached the temporary temple at Desibehera Sahi around 3 am. 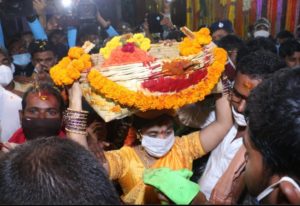 Earlier on Friday, an invitation to the goddess was offered in the form of ‘Etamalliphula’ on Friday. 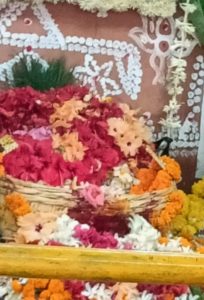 As per local lore, Budhi Thakurani is considered as the daughter of the Desi Behera and the deity stays with her father’s family during the entire yatra period.

Patala Durga Prasad Desi Behera, considered as the present father of Budhi Thakurani, solemnized all the rituals with his wife P Devaki.

Why Goddess Visits Her Father?

According to a legend, the chief of the Dera community used to collect flowers and offer it to the goddess every day.

On a Tuesday night during the month of Chaitra, he had heard a girl crying on the road near his house.

He came out and approached the weeping girl. He saw a young woman with black sari and open hair with tears in her eyes. When he enquired why she was crying, the woman replied that she was on way to her father’s house, but lost her way.

At this, the Dera chief told her, “You are just like my daughter. Don’t venture out in the dark night. Take rest in my house and you may leave in the morning.”

The young woman then suddenly disappeared in the nearby bushes and the Dera chief returned home confused. 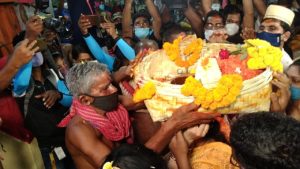 The next morning when he tried to fix the flower on the head of the Thakurani, the flower fell down after every attempt. The dazed chief prayed to the goddess.

A divine voice rang out, “You became my father last night. How can a daughter receive any prayer or offerings from a father?”

Thakurani told him to go home and requested him to appoint a person whom he first met on way home as his successor as priest.

The chief returned home and saw a barber first. From that day the barbers are the priests of Buddhi Thakurani. 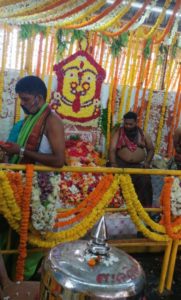 The goddess later told the chief “I am your daughter. I will visit my father’s house every two alternative years for a particular period and return to my temple”. Thus the tradition continues to this day.

Govt Taking All Steps To Prevent Spread Of COVID-19 From Migrants: Odisha Minister