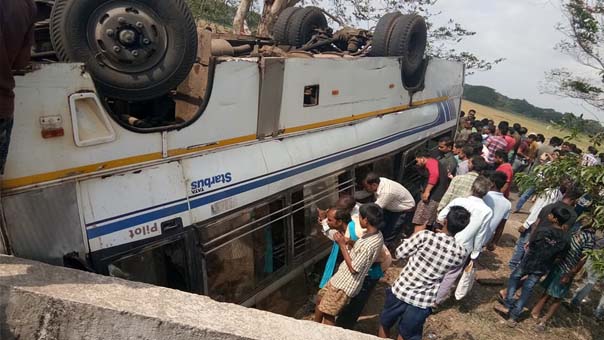 Konark: Three persons died and 40 were injured when a passenger bus skidded off the road and fell into a canal at Jiunti Square in Konark on Wednesday.

The driver and the helper of the bus were among those killed in the accident. The injured were admitted to Kakatpur hospital and around 10 among them later referred to Bhubaneswar for better treatment.
The bus was on its way to Paradip from Astaranga. Brake failure or over speeding could have caused the accident, police sources said.
The accident spot witnessed tension as locals blocked the road, demanding adequate compensation for the family of the deceased.

The blockade disrupted traffic for several hours and buses, trucks and cars could be seen stranded at different points along the road.
The agitators lifted the blockade after police assured them that they would look into their demand.