Today Marks The 50th Year Of Bank Nationalisation: All You Need To Know 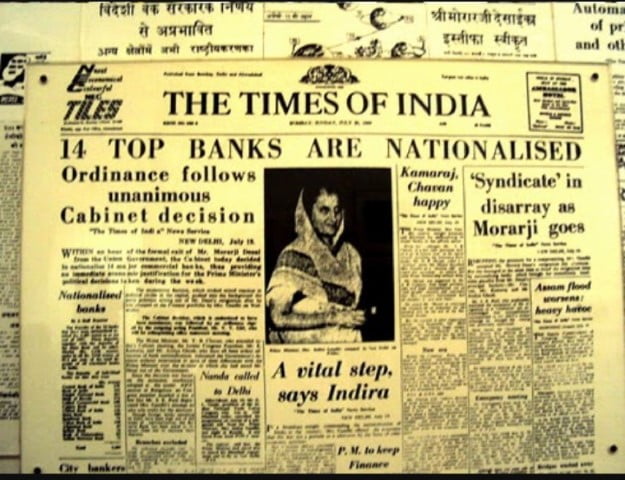 Today marks the 50th year of the historic move by the then Indira Gandhi-led government in July 1969 to nationalise the 14 largest commercial banks of the country. The move was considered unprecedented in nature and scale at that time and continues to remain as one of the most path-breaking reformative measures initiated post-independence in the financial sector.

West Bengal Chief Minister Jyoti Basu, one of the most celebrated politicians of the time, had reportedly said that if “Morarji Desai’s resignation was good news, nationalisation (of banks) was even better news!”.

Here’s how it all happened as reported by financial wire BloombergQuint.

On July 19, 1969, Indira Gandhi in a surprise move, cleared an ordinance in the Union Cabinet to nationalise the banks just two days ahead of the Parliament session.

With this decision, 80 per cent of the banking assets came under government control. By then, the Imperial Bank had already been nationalised and renamed as State Bank of India.

How many banks were nationalised?

In all 14 largest commercial banks in India were nationalised.

# The largest among them was the Central Bank of India with a deposit of Rs 482.76 crore, which was 10 per cent of India’s aggregate deposits.

# Bank of Maharashtra was the smallest with only 1.78 per cent of the aggregate deposits.

# UCO Bank had the largest network of branches with a presence in 22 states.

Why were the banks nationalised?

The aim was to align the banking sector with the goals of socialism. In other words, the goal was to provide banking service to as many people as possible. In fact, the idea had gained currency soon after independence as the banking sector as a whole was in a ramshackle state. The Life Insurance Corporation of India was formed with this very objective after the insurance sector was nationalised in 1956.

Has nationalisation served its purpose?

Talking to BloombergQuint, Bhattacharya said that while it has been able to achieve its core principle of taking banking to every nook and corner of the country, it has at the same time faltered in checking the non-performing assets.

The government, as the owner of the bank, has infused Rs 3.3 lakh core during the last eight years. “But there is little to show in terms of performance in return for this capital. The taxpayers, who fund bank recapitalisation must get more value in return.

As of March 2018, NPAs had risen to 15 per cent, but have come down marginally, hovering at around 12 per cent as of now.

She strongly favoured the adoption of the Singapore model with respect to its management of State-run DBS Bank. The management is fully empowered there. The Indian government could consider transferring its ownership to a bank investment company as has been suggested and distance itself from the functioning of the banks. This model is worth considering.

According to him, nationalisation of banks was more justifiable in 1969 than it is today.

He has rather suggested corporatisation of public sector banks to improve their functioning. This would allow for discretion in government shareholding, greater accountability of operations and increased flexibility in personnel policies.