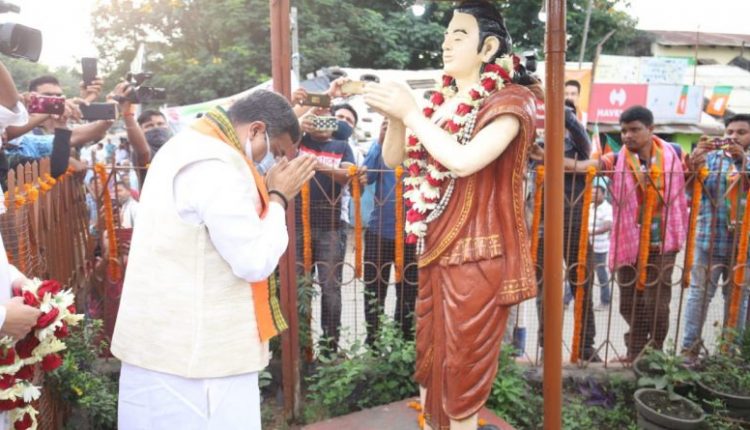 Sambalpur: Bhima Bhoi Research Chairs will be set up at various universities across the country, said Union Education Minister Dharmendra Pradhan on Saturday.

Paying tribute to the 19th-century poet Bhima Bhoi at Rairakhol in Sambalpur district, Pradhan said the biography of Bhim Bhoi will be included in the UGC course. There will be research on his life and ideologies and the UGC has been instructed to take steps in this regard, Pradhan added.

At the international level, efforts will be made to study Bhim Bhoi’s biography, the Education Minister said.

On the occasion of Gandhi Jayanti, Pradhan joined a procession in Rairakhol and paid tributes at the statue of Bhim Bhoi.

The Minister said “today the whole world needs to adopt the philosophy of Santha kabi Bhima Bhoi. Inclusion of his idea and philosophy in course curriculum will be a real tribute to the great philosopher.”

The famous quote of Santha Kabi “witnessing the plethora of plights on earth how one could bear with; let the world get redeemed at my cost”, has been inscribed on the wall of the United Nations Organisation (UNO) Hall in various languages.

A Bhima Bhoi Research Chair was set up at Gangadhar Meher University (GMU) in 2019.

The 19th-century eminent poet Bhima Bhoi was a saint and philosopher. Humanity and liberation of the world were the central theme of his poetic creations.