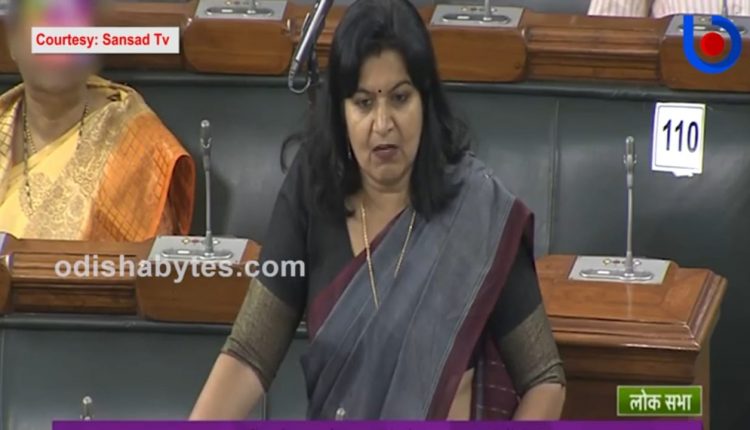 Bhubaneswar: BJP Lok Sabha MP from Bhubaneswar Aparajita Sarangi on Thursday raised the issue of work under the Puri Heritage Corridor Project being undertaken without the permission of the National Monuments Authority (NMA) in Parliament.

Aparajita alleged that illegal digging of ground within 100 metres of the temple is also underway in violation of the Ancient Monuments and Archaeological Sites and Remains Act (AMASR Act).

She further said that the absence of Archaeological Survey of India (ASI) members in the consultative committee for undertaking the work raises eyebrows.

Notably, the ASI is the custodian of the 12th-century shrine.

Pointing out two other shortcomings, the MP said impact assessment and ground-penetrating survey were also not carried out before taking up these works.

“We support development and beautification of Srimandir and Puri. But certain rules have to be followed to ensure the structural safety of the shrine. It is the abode of Lord Jagannath and linked to sentiments of 4.5 crore Odias,” she said, adding that the digging work should immediately be stopped near the temple.

In a counter to these allegations, BJD MP from Puri, Pinaki Mishra said the project work is underway only after a NOC from the NMA. “Construction of four toilets is going on, no digging is being done. The works will have no impact on the temple,” he added.

On Wednesday, Aparajita had met ASI Director General (DG) V Vidyavathi and briefed her about the alleged violation of the structural safety norms pertaining to the temple.

It may be mentioned here that the DG ASI, during her visit to Puri, had cautioned the officials concerned of SJTA and the Works Department about the ongoing work around the ancient monument.

On Tuesday, the government had agreed to constitute a House committee to go into details of the project following ruckus by Opposition BJP and Congress members over the impact of the construction work on the shrine.