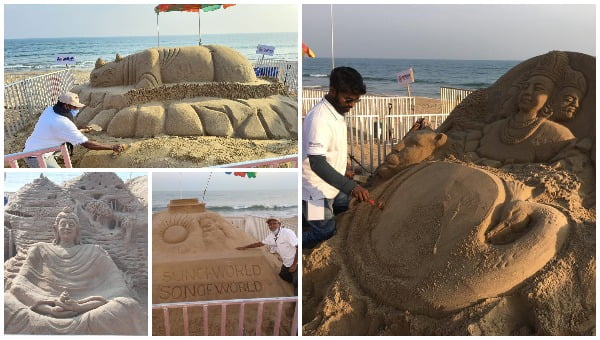 Bhubaneswar: Inside a fenced enclosure, artist Raviraj Arjun Chipkar from Maharashtra’s Shiroda crafts the triad of Gods or ‘Trimurti’—as found on the walls of Ajanta and Ellora caves—with sand.  For him, ‘Trimurti’ defines our ecosystem. To justify the theme of eco-tourism, he is also making sand sculptures of wildlife alongside, on Chandrabhaga beach in Odisha’s Konark.

Raviraj is among 100 other sand artists—from all different parts of the country—who are participating in the ongoing International Sand Art Festival in the eastern Indian state of Odisha.

However, Raviraj isn’t perturbed by the impermanence of the art form. He feels the beauty of the art form can be etched in memories. It’s the 700-year-old art form that has given several artists like him a distinct identity. And, the festival at Odisha is a perfect platform to showcase the art to the world, says Raviraj, while shaping the sand. “To be a good sand artist, you need to have patience,” says Raviraj, who has been practising the art form for the past 10 years.

For artist Appala Raju Surakala from Rajsthan’s Chittorgarh, ‘sand’ is his first love. “I have been working with scrap metals for the past 10 years. But, I love working with sand more. It is a soft and flowing medium. This is both challenging as well as rewarding. You can mould it the way you want to,” says Appala, who shifted from Visakhapatnam to Rajasthan for the love of this art form.

At the sand art festival, Appala shapes up a rhinoceros and a crocodile to depict the eco-tourism theme.

Visitors witnessed the beauty of Bengal’s Sunderbans with the artwork of artist Panchanan Mondal from Bengal. His artwork presented scenes of Sunderbans. Like other artists, Subhajit Mondal from Bengal has depicted the theme with a replica of an elephant safari.

Over the years, the art form has evolved. From divine sculptures, it has embraced contemporary themes through the works of modern-day artists. “It is believed that the 14th century Odia poet Balaram Das was not allowed to climb onto the chariot of Lord Jagannath during Rath Yatra as he belonged to a lower caste.  According to the legends, when Balaram carved images of the Lords on Puri beach as he was feeling dejected, the deities appeared before him. Thus, the traditional art form was all about divine sculptures. But, today we use it to spread awareness on various themes,” says Panchanan.

This year, 100 artisans from Odisha and nine other Indian states, including Rajasthan, Maharashtra, Gujarat, West Bengal, Bihar, Andhra Pradesh, Jharkhand, Karnataka and Tamil Nadu, are participating in the event.

A different theme is set for the artists on these five days.

The festival will continue till December 5.

‘Our Lalit Is No More’, Semi-Decomposed Body Of ‘Mirzapur’ Actor Found In Mumbai Home