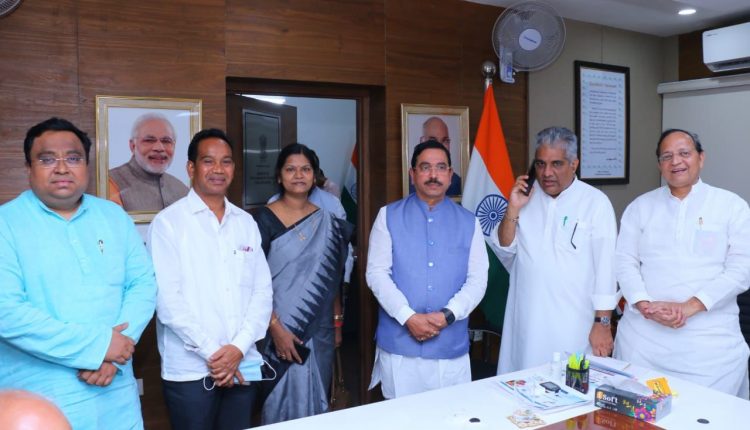 Bhubaneswar: After a rousing send-off from Bhubaneswar airport, NDA presidential candidate Droupadi Murmu receives a grand welcome upon her arrival in Delhi on Thursday. She was received by BJP leaders at the airport in Delhi.

She is scheduled to file her nomination papers on Friday for the 16th presidential polls slated for July 18.

As directed by BJD president and Chief Minister Naveen Patnaik, two Cabinet Ministers of Odisha Jagannath Saraka and Tukuni Sahu have signed the nomination papers of the presidential candidate in New Delhi. Rajya Sabha member from Odisha Sasmit Patra was also present. They will also be attending the nomination filing of Murmu on Friday.

Earlier in the day, Naveen tweeted about his conversation with BJP national president JP Nanda and informed that two ministers would be travelling to Delhi to sign her nomination papers. The CM had earlier urged all MLAs of the state, cutting across the party lines, to vote for the ‘Daughter of Odisha’.

Besides BJD, Janata Dal (United) and Lok Janshakti Party (Ramvilas) have extended support to Murmu. National People’s Party (NPP) chief and Meghalaya chief minister Conrad Sangma and Nagaland chief minister Nephiu Rio will also be participating in the nomination for the presidential election on Friday. It is also being said that Nitish Kumar will also be present during the nomination.

Once elected, Murmu, who holds the distinction of becoming the first woman Governor of Jharkhand, will become the first Odia, and the first tribal to occupy the president’s chair. She belongs to the Santhal community in Odisha’s Myurbhanj district.

Amul Head In Hospital After Car Accident In Gujarat, Out Of Danger