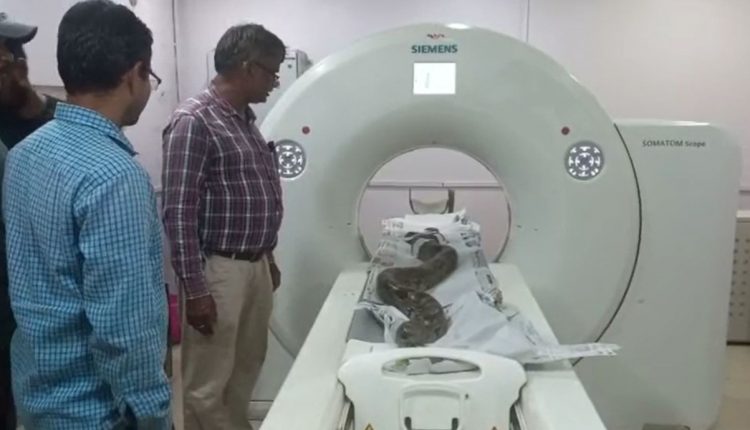 Bhubaneswar: In a rare procedure, a CT scan of a critically injured python, brought from Bargarh district, was conducted by veterinary experts in Odisha capital on Thursday for an accurate diagnosis to facilitate its treatment.

The CT scan of the 9.5-ft python was done by Prof Indramani Nath of Surgery and Radiology department of the College of Veterinary Sciences of the Odisha University of Agriculture and Technology (OUAT) at Modern Health Care. A team of experts assisted during the process.

Prof Nath said it was necessary to conduct CT scan as a clear picture could not be obtained through X-Ray though some fracture and broken teeth could be noticed as the python had sustained serious injuries on its head and mouth.

“Therefore, in order to make an accurate diagnosis we decided to do CT scan. We have to know whether there is any hairline fracture, compression, rupture or damage to tissues,” Dr Nath said.

What was special about the test was that the scanning was conducted without administering anesthesia to the python. “Normally such tests are done on snakes and animals after giving anesthesia, but we did the test without it,” he said.

Stating that this was the second such case for him, Dr Nath said earlier CT scan was conducted for another python which was successfully treated and released at Nandankanan in Bhubaneswar.

General secretary of Snake Helpline Subhendu Mallik, who played a significant role in the treatment of the injured python, said the animal has been critically injured after being attacked with sharp objects and sticks.

After sustaining injuries in head and mouth, the python is not in a condition to move around, he said, adding that experts will decide the line of treatment after the scan report is ready.

Technician Bidyadhar Behera, who assisted in the process, said the rare CT scan took around one hour and 15 minutes. A similar CT scan of a python was conducted earlier in 2017 at the laboratory and a proper diagnosis could be made.