[Watch] Sarmistha Rout Drove ‘The Car’ In Which Odisha Lensman Was Kidnapped! 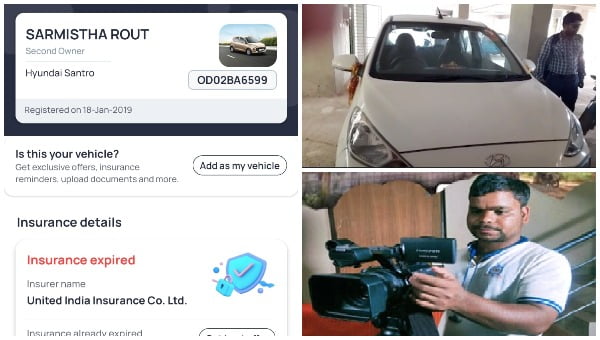 Bhubaneswar: In a fresh development in the alleged abduction and murder of cameraman Manas Swain, police on Wednesday claimed to have found the car of the prime suspect in the case, Sarmistha Rout.

According to sources, the investigation into the case and interrogation of the arrested persons helped police trace the car at a secluded place in Bhubaneswar.

The four-wheeler was found parked at the garage of Sky Tower apartment under Airfield police limits. Cops also recovered some documents from the car after breaking its rear window glass.

“Manas was kidnapped in Sarmistha’s car. The body was also taken to Nayagarh in the same vehicle. Five persons– Sarmistha, Jhuna Bhoi, Bibek Nayak, Ranjan Nayak and Bhagyadhar Nayak– were present in the car when the body was being taken for disposal,” said sub-inspector, Matto police outpost, Budhiram Mohanty.

Sarmistha reportedly drive the car while Manas was being kidnapped.

A security guard of the apartment told the media that former Information & Public Relations (I&PR) Director (Technical) Niranjan Sethi, whose arrest on Monday gave a shocking twist to the case, used to visit Sarmistha frequently. She had introduced him as chairman of her organization and instructed the guard not to enter his name in the visitors’ register.

Sethi is believed to be the co-conspirator in the case.

While police have arrested Sethi and his associate Ranjan and kidnappers – Bibek, Bhagyadhar, Jhuna and Sarmistha, who is the owner of the web channel where Manas previously worked as a cameraman, are still absconding. “Her phone is switched off. Efforts on to trace her,” Mohanty added.

It is pertinent to mention here that the Orissa High Court had rejected her anticipatory bail plea and added that “if she surrenders in the court within four weeks and moves for bail, it will be disposed of as expeditiously as possible”. Her bother, who had allegedly planned her escape after the murder, was also nabbed from Vijayawada on Tuesday.

According to media reports, an attempt was also made by the accused to shift the body of Manas from where it was buried in Nayagarh district.

Locals informed the police that the night before the body of Manas was exhumed from the foothill of Badhipatna hill near Sunakhela in the district, some unidentified people were seen at the spot. They were allegedly checking the spot with torchlight and fled on being spotted by the villagers.

The police suspect that the unidentified people might be the accomplices of Sarmistha and were planning to shift the body to some other place so that it would not be traced.

Notably, police had come to know that Manas, who went missing from a wedding venue in Bhadrak on February 7, was murdered after Krushna Chandra Nayak, Bhagyadhar and Bibek spelt the beans following their arrest on March 12. Based on the statements of the accused, his body was exhumed from Ranapur in Nayagarh the same day. The trio also confessed to have committed the crime at the behest of Sarmistha, police sources said.

Sethi is believed to be the mastermind behind the burial of Manas’ body and subsequent attempt to shift it.

The cameraman was reportedly in possession of some controversial videos and photos, which could have landed Sarmistha in trouble, and she was desperately trying to get the memory chip having some sensitive content related to some high profile people.