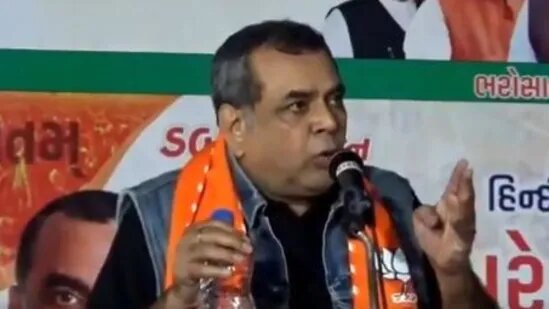 New Delhi: Ahead of the first phase of the assembly election, which was held on December 1, actor and former BJP MP Paresh Rawal campaigned in Gujarat. A video of his campaign speech in Valsad is now going viral drawing the ire of social media users who accused him of Bengali-hatred. “Gas cylinders are expensive but they will come down. People will get employment too. But what will happen if Rohingya migrants and Bangladeshis start living around you, like in Delhi? What will you do with gas cylinders? Cook fish for the Bengalis?” Paresh Rawal said in his speech on Tuesday. Gujarat can tolerate inflation but not this, the actor-turned-politician said. “Way they deliver verbal abuses. A person among them needs to wear a diaper on his mouth,” he said, as reported by DeshGujarat.

Reacting to Paresh Rawal’s fish-eating Bengalis jibe connecting it to Rohingyas, Trinamool MP Kirti Azad asked whether Paresh Rawal was hinting that the BSF and the Union home ministry were not working properly as he said Bangladeshis and Rohingyas were entering India.

‘babu Bhai’
“Aap to Aise Na
The”!!!!
If Bangladeshis and
Rohingyas are entering
#India it means @AmitShah as Home
Minister is not doing job
properly! @SirPareshRawal
are you saying #BSF
doesn’t gaurd the borders
properly? https://t.co/MuaFTC73MY

Social media users called Paresh Rawal’s speech ‘xenophobia and dog whistling against Rohingya and Bangladeshi Muslims’ while they said his hatred towards fish-eating Bengalis was hardly subtle. “Disgusting xenophobia on display. At least we Bengalis cook fish, not spee venom and propagate hate. And this man played a Bengali in his latest film, that too a character written by a legendary Bengali. Bengal should boycott movies of @SirPareshRawal,” a social media user wrote.