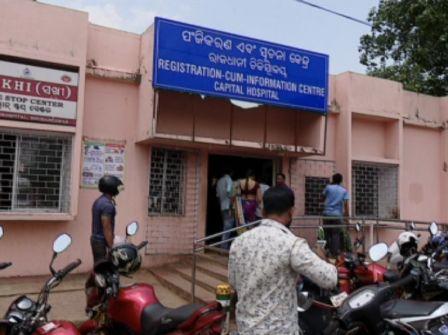 Bhubaneswar: Even as the Odisha government has intensified its drive under the Mo Sarkar programme to ensure better healthcare in state-run hospitals, a woman was forced to deliver her baby out in the open at Capital Hospital here.

According to reports, one Pana Murmu from Salia Sahi slum in the city had come to Capital Hospital with her family around 8 pm after having labour pain. Pana was first examined by doctors at the mother and child health (MCH ) ward and then taken to the labour room.

The family did not have the money to admit Pana in Cuttack, but they took the woman writhing in immense pain out of the labour room. She later gave birth to a boy on a footpath near the Blood Bank on the hospital premises.

Tension ran high in the hospital following the incident.

On Saturday, Capital Hospital superintendent Narayan Sethi told the media that the patient had come to the hospital on Friday. But she was sent back by the doctor as she had no labour pain. But after she had a pain, she came back to the hospital in the night and delivered the child on the hospital premises.

Sethi also denied knowledge about the woman being allegedly refused treatment by the doctor in the labour room. “I have not received any complaint on this matter. But if a complaint is lodged, it will be investigated and appropriate action will be taken against the guilty,” he added.