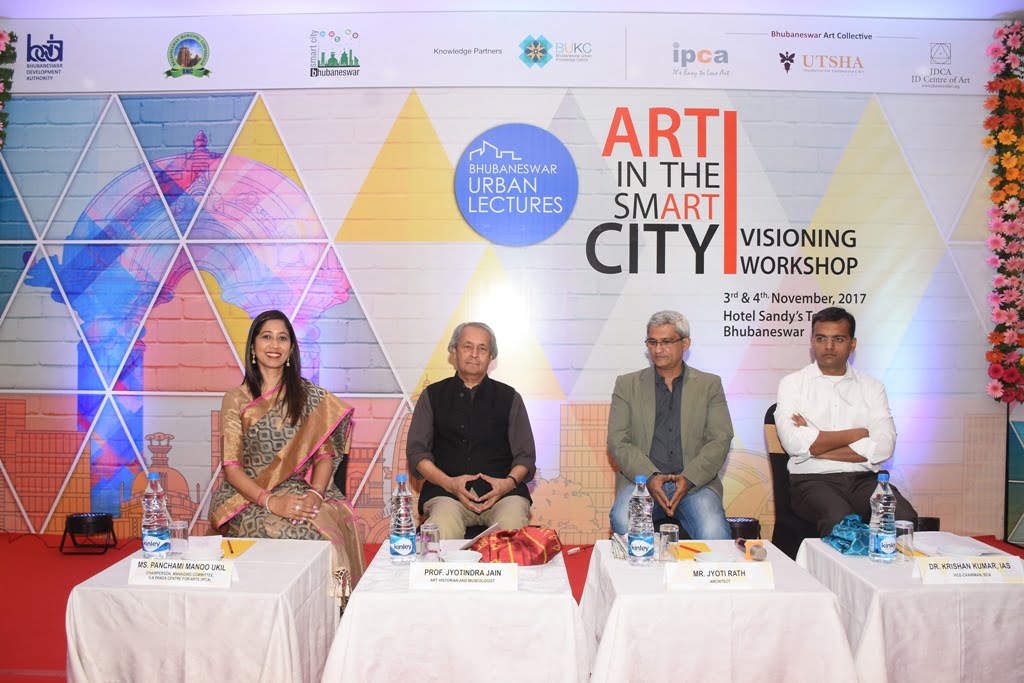 Following the deliberations by eminent artists, thinkers, city officials, urban planners, architects, over two days, at a visioning workshop on ‘Art in the Smart City’, several important suggestions came to the fore.
Among them, a few notable ones are maintenance of space i.e. water bodies, beautification stretches around monuments, temple illumination and collaboration with the different temple trusts to include artists in the festivals round the year. Another key suggestion, which came up during working group sessions, was to create space for artists and art-based activities inside the pandals or tents so that the artists would capture the essence of our traditions in their colours and creations.

Following the inaugural and plenary sessions on Friday, the participants and experts were divided into five different working groups to deliberate and come up with suggestions for the city to integrate art in the city development process. While one group suggested introduction of a CARRIER OF ART (Kala Bahak) to help carry artists both from fine arts, performing and murals to mingle with people at various corners across the city, another group consisting of artists, architects and urban planners suggested to map culture clusters across the city, creating art trails and art parks, including nature and heritage walks, their branding and marketing through events. One of the working groups also called for organised art districts along large water fronts, tracts and last but not the least, creation of a unique and world class open auditorium for art in the city, which has seen, experienced and maintaining the art traditions for over 4,000 years, from now.

On the first day of the workshop, Vice-Chairman, BDA-cum-Commissioner, BMC Dr. Krishan Kumar elaborated on various initiatives planned and undertaken by the city to integrate public art as a vital component in the overall development of the city.

Going forward, all suggestions and inputs received from the participants and artists will be collated to draft the Bhubaneswar Public Art Master Plan.

It may be noted here that Bhubaneswar has already initiated integration of Public art and mural installations as a key component in urban-scape of the city, as part of a dedicated programme Street Art and Mural Project (StAMP). The city undertook massive street art and mural campaign ahead of the recently concluded 22nd Asian Athletics Championships. From traditional motifs to the contemporary life portrays at major flyover underpasses and sports graffiti were extensively done ahead of the Asian Athletics Championships. Besides, the city has facilitated thematic graffiti connecting famous Bollywood characters on the walls of public toilets to sensitise citizens against open defecation along with experimental 3D street art exercises.