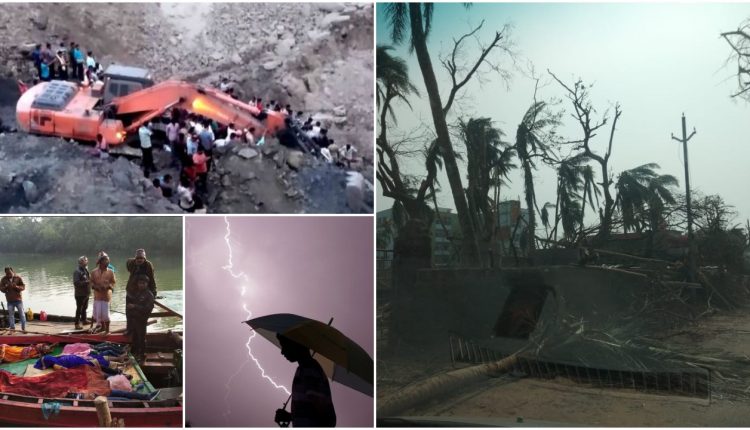 Bhubaneswar:  Cyclones are nothing new to Odisha. To say that the people of Odisha are accustomed to them would be an overstatement because each time a cyclone hits the state, it leaves behind ravaged cities and homeless people. What would not be an overstatement is the fact that the people and the government of Odisha have both learnt how to deal with them in terms of preparedness. Going by the way Odisha bounces back each time, it would be best to say that the state and its people get stirred but not shaken by cyclones.

However, cyclones like Fani, that come at an unexpected time of the year and come in the category of Extremely Severe Cyclone (ESC) make history. So, 2019 will be remembered for one of Odisha’s worst cyclones, which left a trail of destruction behind.  A staggering 1.40 crore people in 14 districts of the state were hit reminding people of the super cyclone of 1999.

Why Was Fani Unusual?

The very fact that Fani came on May 3, a month traditionally not considered cyclonic in Odisha, made it unique.  With a wind speed that crossed over 200 km/hr when it hit Odisha, it was classified as the strongest tropical cyclone to hit the coastal state after the 1999 super cyclone. Moreover, it remained over the Bay of Bengal for 10 days, whereas such severe cyclones usually make a landfall within 4-5 days post formation.

This stay made it a deadlier cyclone and resulted in throwing normal life even in Bhubaneswar and Puri out of gear. The power distribution lines and transformers got damaged and so were the telephone and mobile services lines. No power meant no water supply. Add to this the lack of communication facilities and shortage in supply of things of daily need, especially vegetables and milk, there was total deadlock and the picture of misery was complete.

The worst was yet to come. Since it was an unseasonal cyclone, there was flood fury in the state in monsoon. Nearly 1.09 lakh hectares land was flooded out of which, at least 84 per cent was farmland. In total, the estimated loss to the property, land, crop etc was Rs 24,176 crore.

Fani proved even meteorologists wrong. Theoretically, if cyclones do occur in the period that Fani did, they do not make it to the ESC level. Such cyclones are common only in October and November. But Fani was different. Where wind speed and destruction are concerned, it surpassed the cyclone of 1999. Yet Odisha has come out of it.

The state will continue face the challenge of such a natural calamity due to its vulnerable geographical location. The only solution lies in facing such cyclones bravely and emerge wiser like Odisha has. Every time has been a learning experience for the government and the aftermath of Fani proved that the government could not have done better where its disaster management was concerned. Its efforts and efficiency were lauded both in the country and outside.

Though Bulbul made a landfall in West Bengal and the state bore the major brunt (it originated in the Bay of Bengal), and later changed course to hit Bangladesh coast, in Odisha, there were heavy rains and strong winds on November 7 and 8. It affected crop loss in 2 lakh hectares in the state.

Five workers were killed and several others were injured in a midnight mishap on July 23. They were trapped in a landslide at Bharatpur coal mine of Mahanadi coalfields in Angul district when coal blasting was underway. A portion of the land collapsed leading to a landslide and trapping over 10 workers, heavy-weight vehicles and equipment.

Right in the beginning of the year, ten picnickers were killed when their boat capsized in river Mahanadi near Hukitola village of Kendrapara district on January 3. Rescue operations were by no means an easy task due to the presence of crocodiles.

Two sisters- Sabita Giri and Purnima Giri who saved over 10 lives were felicitated by the Chief Minister and also received the Indian Council of Child Welfare’s (ICCW) National Bravery Awards 2019.

Odisha alone accounted for 15 per cent of total lightning strikes in the country, which was 9 lakh, between April 1 and July 31. The state, however, managed to bring down the number of deaths through  implementation of an early warning system, installation of lightning protection devices and lightning-resilient shelters.

While 465 lightning deaths were recorded in Odisha during the year 2017-18, it came down to 320 in 2018-19 which is about 31 per cent decline in rate of human casualty, Special Relief Commissioner (SRC) Bishnupada Sethi had said.

When severe cyclonic storm Fani made landfall along Puri coast on May 3, the state had witnessed more than one lakh intense lightning strikes. Odisha, however saw zero casualties owing to its preparedness.